Showing posts from July, 2021
Show all

The Veggies of Our Labor 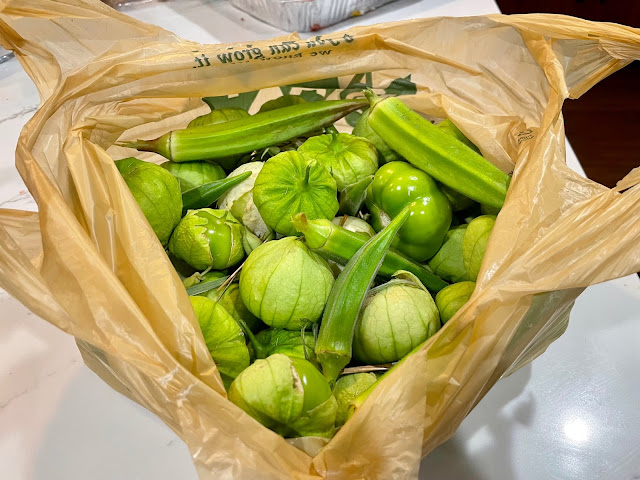 Finally, I'm getting to the good part of last trip to the farm with scenes from our harvest. Above is a shopping bag full of green beans (unseen on the bottom), tomatillos and a handful of okra. One of my favorite things to make with tomatillos is enchiladas verdes.  The cherry tomatoes are really starting to turn but I was really surprised to see four nearly ripe regular tomatoes as well. I picked those to finish ripening on our counter and will hopefully make some sandwiches out of them.  Our potatoes are done for the year and the plants all dried up. We were spent so we dug the row that we have been pulling the potatoes out by hand for several weeks (easily due to the muddy conditions earlier) and still came up with nearly a bushel. We will probably dig the second row on our next trip.  Also, I didn't take a picture but I tilled up enough of where our spring stuff had been planted (mostly beans that never grew) to plant a couple more rows of beans. I've never planted any
21 comments
Read more 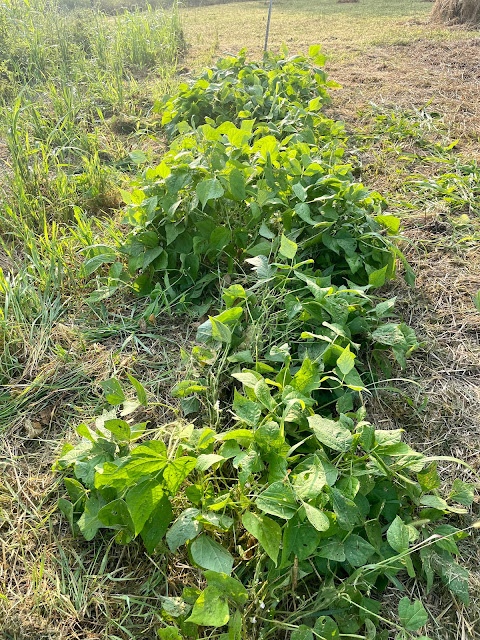 After planting the new trees, we all did quite a bit of hand weeding our disaster of a garden this year. But despite the excess weeds (oats sprouting from our mulch), we are still having some successes along with some failures. We planted three batches of beans at the first of the year and this is the only batch that grew. The first batch never even sprouted, preferring to rot in the cold, wet mud. The second batch a week later sprouted a few but not worth growing so I mowed them off the prior week. The final batch we planted grew and are pretty healthy. They are starting to put on beans and we picked a mess of them. Our various squash/pumpkins have had a hard go of it thus far but are starting to perk up now that the soil isn't wet anymore and the summer heat has arrived. But this is now the start of our dry season and they aren't nearly as far developed as they normally would be at this point so I'm not sure what if anything we will get from them. They are starting to s
19 comments
Read more 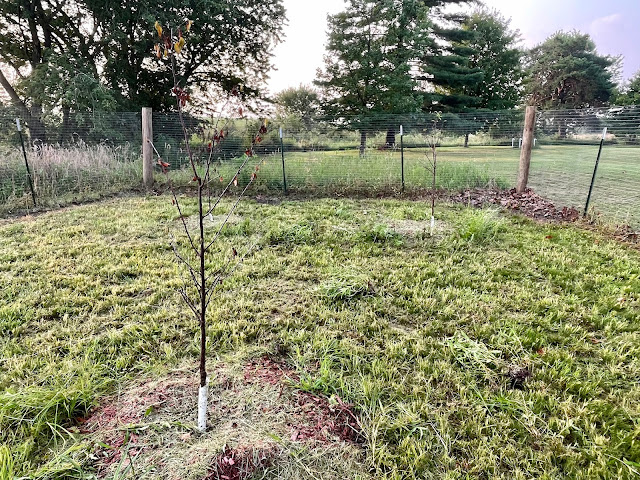 As part of our farm garden project, we fenced in some land for an small orchard. It was formerly a buffer strip of land next to Cook Creek which is not even a trickle of water right now and only a small trickle during wet times of the year. We found bought three trees at a nursery outside our normal range of travel but definitely much cheaper than our local nursery and stuck them in the ground earlier this spring with hopes of getting more when the nurseries started putting end of the year discounts on them. This spring they looked so good and they have looked pretty good until the last several weeks which saw several torrential rains. Above is how we found them on an early morning visit to the farm and I'm guessing two have definitely succumbed to the excess moisture. Above is the sour cherry tree which only has two discolored leaves that aren't fully brown. Above is a plumcot that has a few green leaves still. I'm hopeful that it might have enough of a chance to pull thro
26 comments
Read more

- July 23, 2021
Once again, for perhaps the third time in my life it has happened. My garage door spring let loose. Like previous times, I was somewhere in the house (in this instance in my office) when I heard a terrible clatter. This time is sounded like someone took a metal ladder and threw it down on the floor with enough force to slide clear across the room. The previous times I have been alone at the time and so inspected for the noise immediately but this time both of my daughters were in the house so I just assumed it was something they dropped and promptly forgot about it. Later that day I went to go get some wood for a project I'm working on and the garage door would only open about two inches and then stop. Repeated pressing of the button didn't get it to work. So I checked the sensors and saw they looked fine and then based off past experience, glanced up at the springs and immediately saw that one spring was now in two pieces. It was time for new garage springs.  Unfortunately, t
14 comments
Read more 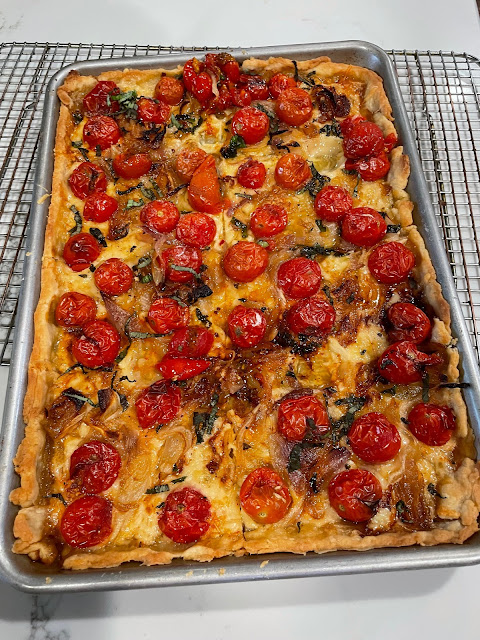 Despite the depressing weed situation, we were able to harvest some cherry tomatoes from the garden along with a couple pods of okra and dug up a couple hills of potatoes. The cherry tomatoes went into a tart seen above which we had for supper the next evening. It is easy to make and a favorite between my wife and I.  Although not from our garden, we did obtain some local blackberries and nectarines that my wife turned into another form of a tart. It tasted as good as it looks too. I didn't mention this on the last post but my dad mentioned that our newly planted fruit trees that had been doing so well this spring might have died. I'm guessing it was probably due to too much moisture like everything else in our garden. I didn't walk over there to look as it was way too muddy and I was way too depressed. Maybe next time. Our local nursery has a few pear trees on discount this week and I may stop in later in the week to see if he wants to make me a deal for the remainder of
21 comments
Read more 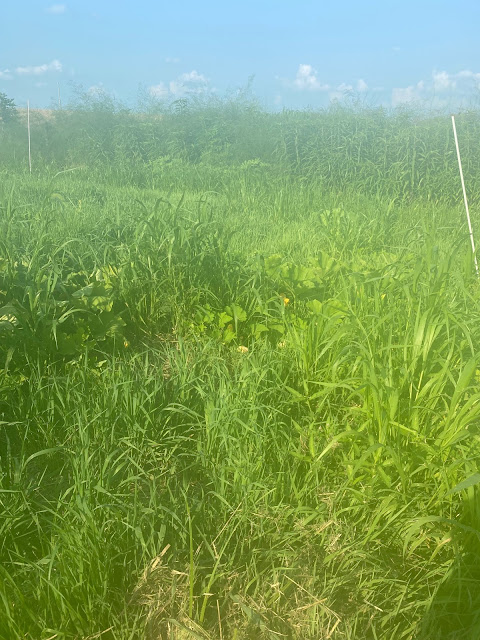 The first year of our expanded garden is definitely keeping us humble for a number of reasons, one of which you can see above. This is what we came back to after three weeks of being away. I'm not sure why the photo ended up like I did but I'm guessing it was humidity build up on the lens after just stepping out of a nice air conditioned vehicle. Humble lesson one has just been the weather which we can't control. It was a very unusually long cold spring and so what we did get planted early was stunted at best and in some cases never came up. We lost a couple rows of beans and my dad lost his first popcorn planting. All the squash, tomatoes, peppers, etc were very stunted and only now in recent weeks seem to be gaining ground.  Humble lesson number two was our mulching choice. We got some oat straw that unbeknownst to us was chock full of oat seed. So full that every time it rains, another round of oats commences to growing over every square inch of our garden. Fortunately t
25 comments
Read more 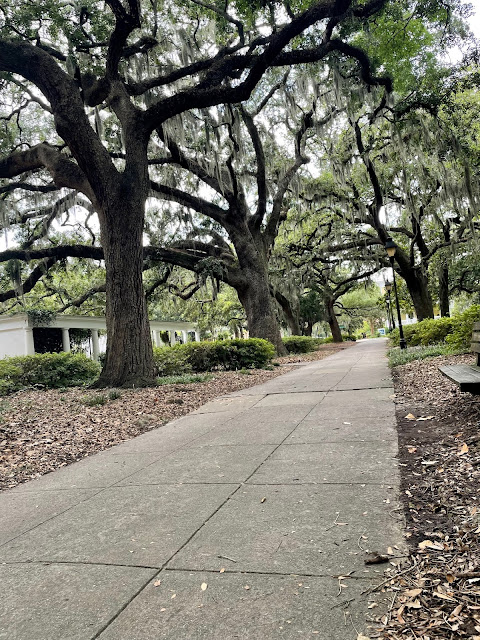 After a well rested stop at my brother's house, we set off for Savannah, Georgia. All along the trip thus far, we had been forewarned of the massive crowds that would be clogging the roads leading up to the fourth and including this day, the day after the fourth, but never saw any of that. Instead the roads seemed very sparsely populated with traffic. Perhaps all the dire warnings scared people off? We made it to Savannah in good time and were soon enjoying the parks with all the live oaks garnished with Spanish moss that they are known for. We spent all day there and then headed out to the suburbs in the evening for a more reasonably priced motel room. The following day we set forth north with big plans to see Charleston, South Carolina and indeed we made it there and walked down their famed Market Street for awhile. However as we set forth to go see other areas of town, I inadvertently parked too close to a curb that had been lined with large pointy rocks that poked a hole in the
16 comments
Read more 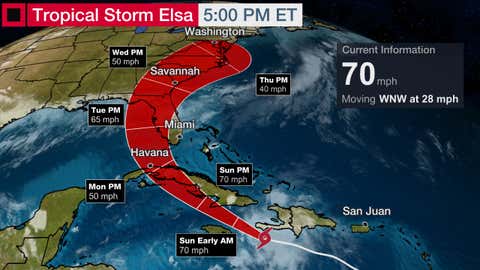 In the time of Covid, we have been limiting our vacations to ones where we can self contain ourselves in a vehicle versus flying with many others. So we have been crossing off some long road trips that would have been further down our list of things to go see had times been different. One of the things my wife has always wanted to see was Savannah, Georgia and so that became our goal for this trip. But as I stared at maps looking over routes, it became clear that we could combine other things into this trip since we would be already nearby. But two days before we were set to leave, Tropical Storm Elsa made her presence known and apparently was heading for many of the same destinations as we were. Fortunately however, at the time we were packing up getting ready to leave, she was visiting a couple days after us so we decided to proceed with the trip but with some alternatives in case she sped up her arrival or we got delayed. Our first official stop was going to be to visit with my bro
25 comments
Read more

- July 02, 2021
We are on the road for a summer vacation and I don't have any pre-written posts so the blog is on hiatus until my return in a week or so.  Hope everyone has a Happy 4th of July and beyond!
11 comments
Read more
More posts