Showing posts from April, 2021
Show all

Another Death In the Family Story 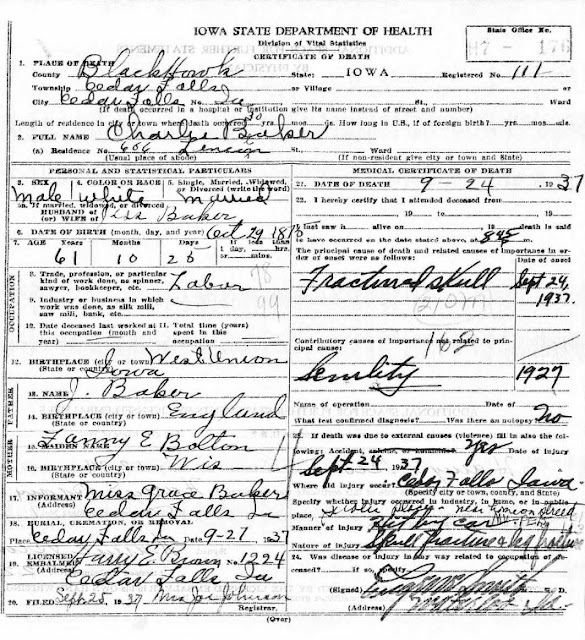 See my previous post for the backstory but while cleaning up a profile, I came across a death certificate issued for Charles Webster Baker, son of my 3rd great grandparents. I was expecting the normal heart disease or other similar disease but was taken about when the cause of death was listed as "Fractured skull" in big bold text. I knew there was a story there and down below, it indeed said he was killed when "hit by car". He had been 61 years old at his death and thus old enough that I never really went looking for his death but upon seeing the above, I changed my tune. Fifteen minutes later, I found the full newspaper writeup posted below. Pretty much it sounds like something I have done many times except this time Charles wasn't looking the right direction to see if traffic was coming and paid the ultimate price.
Post a Comment
Read more 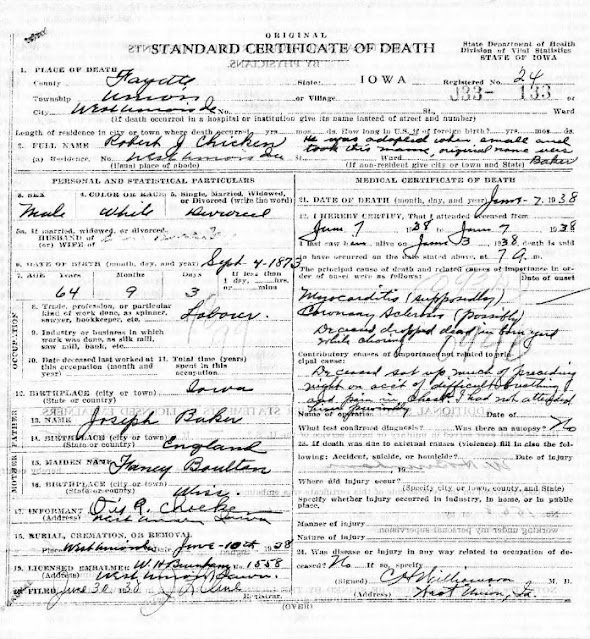 In support of International Women's Day earlier this month, I had posted my tribute of my 3rd great grandmother Frances. She was born in Wisconsin to English immigrant parents, her father died in the 1849 California Gold Rush and her mom took her and her two siblings back to England. Frances however, sailed back to the U.S. five years later at age 17 to marry my 3rd great grandfather, someone who she was most likely familiar with since he lived in the same town she was born in Wisconsin. The story of Frances celebrates independence and the American dream all in one microcosm of a family. The post drew a comment from someone interested to learn more and when I went to provide the link of her biography information on WikiTree, I realized I hadn't updated it. This led me to updating not only her profile but those of her kids which brings me a long way around to the gist of this post, her son Robert James Chicken. Robert James Chicken was actually born Robert James Baker due t
Post a Comment
Read more

Another Will, Another Surprise 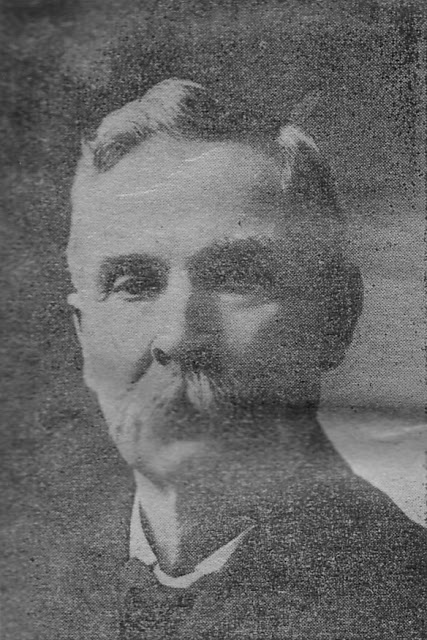 After the success of obtaining the probate record of my 3rd great grandfather and the court case that decided his estate, I thought while I had a contact at the courthouse there, I would just go ahead and search for other probate files of ancestors who lived and died in that county. Of all of them, only one would have a file and as it turned out, it was even larger than my 3rd great grandfather's file, clocking in at a whopping 130 pages! Stephen Cogswell, above, is also a 3rd great grandfather whose family were long time citizens of the state of New York after immigrating here in the early 1600's. In fact, they actually were ship wrecked on the shores of Maine and only after walking days/weeks to the south were they able to find transportation to take back up to Maine, salvage what they could of their personal belongings, pick up the remainder of the family and make their way to New York. That is another story in itself.  I don't know the reasons Stephen' father Si
2 comments
Read more