Back From My Vacation... More or Less Intact 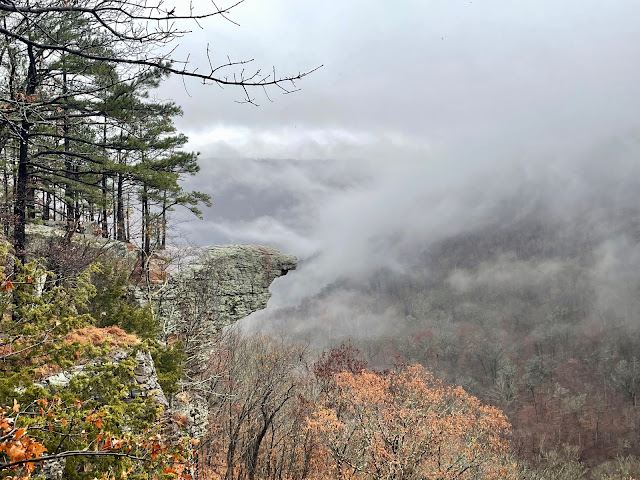 We headed down south the family cabin to celebrate Thanksgiving and we accomplished that. We had prepared a lot of what we ate for our Thursday dinner back home in Iowa so there wasn't much to do except to heat things up and make a few odds and ends to go with it. The forecast was for rain and indeed it was raining. We decided to do a small hike anyway and went on a hike we did the last time we were down there to a somewhat famous outcropping of rock seen above. Our daughters, who had never been there, were with us this time. We walked out on the rock and had our picture taken so those who get our Christmas card, will see us in that version of the photo.

The following day wasn't raining but we spent it helping friends of ours collect a winter's worth of firewood. Although there is some work involved, we enjoy doing it and just being in each other's presence. Unfortunately for me, on the final (as it turned out) load of wood, I was helping to throw it from a pickup into a pile and being tired and somewhat careless, slipped in the loose debris and did a header off the back of the truck into the wood pile. It knocked me senseless, contused several spots on my forehead, hip and legs and most painfully, perhaps tore part of my rotator cuff muscles. I declined the MRI to know exactly how badly I tore things since the treatment part is the same regardless. I am now doing physical therapy from now until who knows how long to get full range of motion and strength back into my arm. Fortunately, I can move it enough to eat, get dressed and do all the basic things in life but I'm not going to be doing jumping jacks anytime soon. I certainly wasn't planning on causing a serious enough injury to require physical therapy but such is how life deals at times.

On our final full day there, I opted out of the family hike and stayed back to concentrate on healing my wounds which weren't diagnosed until two days later anyway when we were back in Iowa. The rest of my family went on another short hike to see a rock balanced over a ravine seen below and also on another short hike later. The latter one was during extreme fog so there wasn't any pictures taken to show. It was great to get away from home, see friends and family and eat a lot of food that could be worked off by hiking and processing firewood. 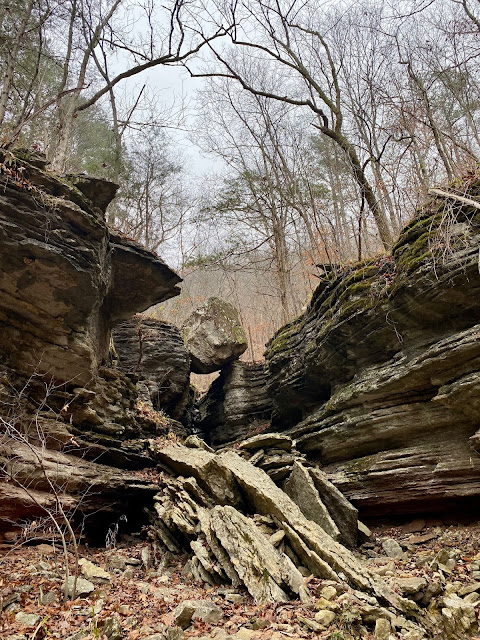