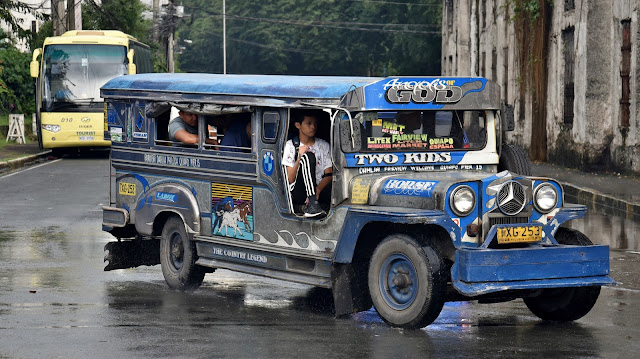 What do you get when you cross a Jeep with a mini bus? Although that question had never entered my mind, I discovered the answer while in the Philippines. What you get is called a Jeepney. The front end has the same grill, lights and shape of a Jeep but with wide flared fenders and the back end looks similar to a mini bus. They are everywhere in the Philippines and are a widely used source of public transportation.
Most Jeepneys had routes that they followed with a sign listing both end points. Once you found the vehicle going your way you just climbed in and gave them your money, which is really harder than it looks. The entrance to these vehicles is located where an emergency exit door would be on a school bus. Once inside, the distance between the roof and the floor was about four feet with one bench seat running along each wall from the driver to the door. Filipinos, being of small stature, could just hop right up and take a seat. Me being six foot two inches tall, had to scrunch down to get through the door and do a odd sort of duck walk to make it to my seat much to the amusement of everyone else. Once seated on the low benches, my knees would end up being near my ears because I had to fold my long legs nearly doubled just to keep my legs from taking up the entire narrow aisle.

You would pass your money (usually around $0.05 or $0.10 US dollars) to the driver and away you would go. There were two bars bolted to the roof that provided handholds for each of the bench seats. I soon learned that if you didn’t grab on to these, you would end up sliding down the seats and possibly squishing a whole row of Filipinos. I’m sure this wouldn’t be looked upon kindly by their culture.

Quite often, there wouldn’t be enough room in the Jeepney for all the passengers and so the last people would grab a railing and hang off the back end. If they were going for quite a ways they might just climb up on the roof until their stop. If you knew where you were going, (which I never did) you could just yell when you wanted to stop, otherwise, the customary way to signal the driver was to beat on the roof. This worked whether you were inside or on top of the Jeepney.

The outside of a Jeepney was something in which the driver took great pride. It was brightly painted, adorned with lots and lots of chrome, and festooned with about any ornament or decoration that was humanly possible. Each Jeepney had some unique name but generally fell in one of three categories; religious, luck, or sexual. Some of my favorites were Hail Mary, Two Guys a Girl, and Last Chance.

Chance was always something I felt I was taking when riding a Jeepney. On one four-hour ride to see the rice terraces, the driver appeared to have just made puberty the day before. When I mentioned this to my hosts, they said he probably had been driving since he could see over the wheel, which didn’t reassure me because that couldn’t have been, but a week ago. Never the less, he skillfully sped us to our destination over some of the bumpiest roads and paths that I can imagine.

Overall, my Jeepney experience was pleasant merely for the fact that I never plunged over a cliff in one. If I had, I’m sure I would have been riding in the one that was named Last Chance and not the one named Hail Mary.
***********************
Jeepneys are a mixed bag of my emotions. During my early trips, they were a novelty but produced copious amounts of pollution and lacked any sort of regulations on preventing pollution. It was common to see them parked along side the roads with a rock thrown under the wheels to keep them from rolling down the mountain and a native person working underneath them. There were no sensors or sophisticated exhaust scrubbing systems. As a result, the air of Baguio City was atrocious to breath except right after an evening rain shower. It got better higher up in elevation towards the outskirts of town where my in-laws live but I'm sure it was toxic to breath long term.
These days, new laws have pretty much caused the jeepney to completely disappear. There are still a few of them out mostly as a homage to their past and to attract tourism dollars but they are no longer the main source of transportation in Baguio City as they once were. Instead they have been replaced by private vans that haul people to and from the town center. This has caused two more things to happen. First, the streets have become impossibly crowded as more and more vans are on the road to replace what a few jeepney could have carried. Second, because the private vans are modern and have pollution controlling sensors and catalytic converters, the foul smell of Baguio City has completely disappeared. Instead, you smell the sweet smell of being in the mountains mixed with normal city smells, such as the food vendor on the corner. So while it now takes forever to go anywhere and you can spend hours sitting in traffic, it at least smells much better and probably isn't taking years off your life and so it is an acceptable trade off for the time being.
Philippines