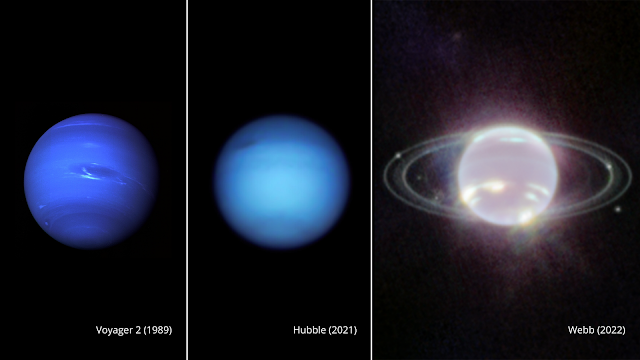 The James Webb telescope continues to prove itself an invaluable tool in the pursuit of knowledge. A couple weeks ago it took the first photo of an exo-planet or planet outside of our own solar system. Last week, it took the above picture of Neptune showing that it too has rings like Saturn. When I think of Neptune, our furthest planet since Pluto was kicked out, I think of the "blue marble" picture taken by the Voyager 2 spacecraft on its way by.

It has also conclusively found carbon dioxide around another planet. That in itself doesn't tell us much but if combined with methane, could be a signal of lifeforms. Unfortunately, this planet didn't have methane but perhaps the next one or one down the road will. I can't fathom a world where we aren't alone... yet, but that day may be coming.

Below is a picture of a "cartwheel" galaxy somewhere out there. It makes me wonder if someday I'll get to see a "selfie" image of our own galaxy. I'm guessing the chances are slim since the James Webb can't do it from within our galaxy nor can anything we've launched yet. To date, only one object has crossed out of our galaxy, Voyager 1, and it's camera is no longer on to save energy.

The only thing certain is that there will be more interesting things discovered by the James Webb Telescope.