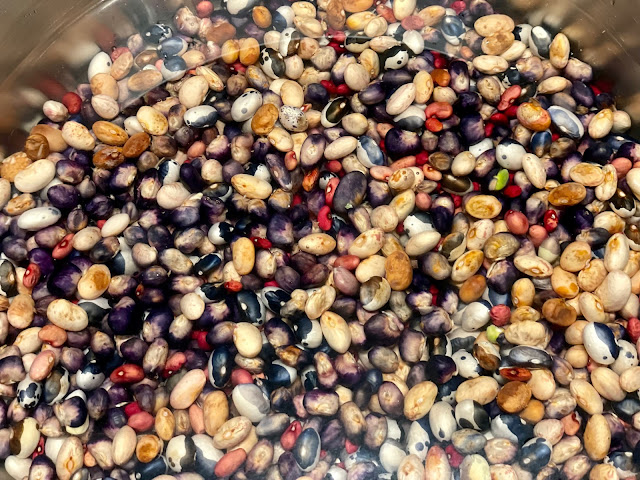 Although not yet done with our dry shell bean harvest, the remaining variety still has a way to go before being dry enough to pick. A couple of other varieties didn't do so well and of the varieties that did do well, when putting them in jars to store, I had some partial jars. So we took a half dozen partial jars, soaked them in a pot over night and made a ham and bean soup the following day for lunch. Above is a picture of the soaked beans before we started adding the flavorings and ham.

I tried eating some of the various types of beans separately for a taste test of sorts and couldn't really tell much of a difference in flavor. There were subtle texture differences but I'm not sure that is due to the bean variety or just the length of soaking time to get rehydrated fully. All the beans were very meaty and flavorful. When cooked with some ham and some spices, they were downright delightful. After I'm done writing this post, I'm going to have another bowl for today's lunch. 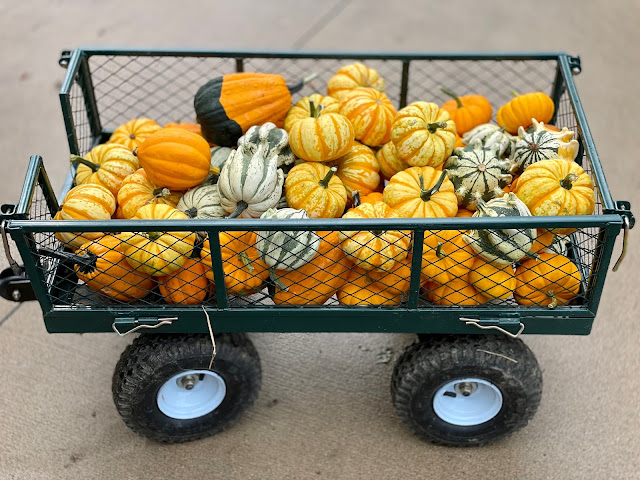 When we were putting in our squash and pumpkins, the girls planted some hills of gourds. They have done quite well and so after picking some of them, we put them in our garden wagon back at our house and have tried selling them on Facebook to friends. The girls are keeping the proceeds for a rainy day. We haven't sold a lot of them but we've sold a few. After we've sold to friends and given some to others as gifts, I will probably just put a sign and a coffee can out there and let others pick them at their leisure and hopefully leave behind some money for the girl's slush fund.

All the squash plants are still mostly green and healthy and with a recent rain after months without, they might hang in there awhile longer. That is good because I'm just finishing up preserving our apple crop for the year and need a break before going into squash preservation mode.