It Started Out Epic 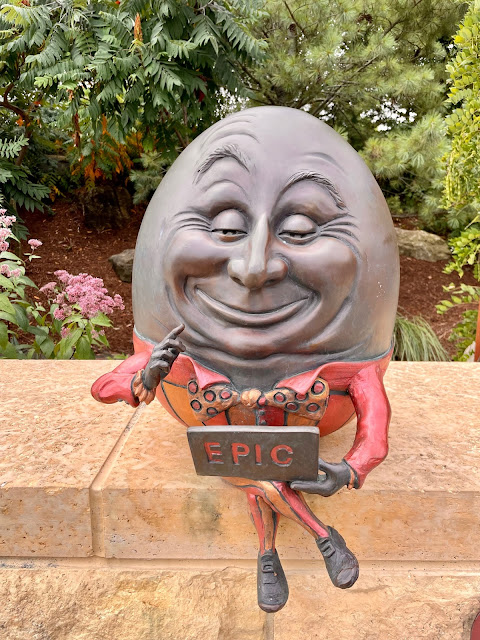 Our latest vacation began at all places, a company campus called Epic which makes and distributes software for the medical community to manage patient records. It was not something that ever crossed my radar but my wife, plugged into the medical community, was well aware of it and that we would be near it on our way north. So we stopped and went on a self guided tour along with hundreds of other people that were evidently more in tune than I was. 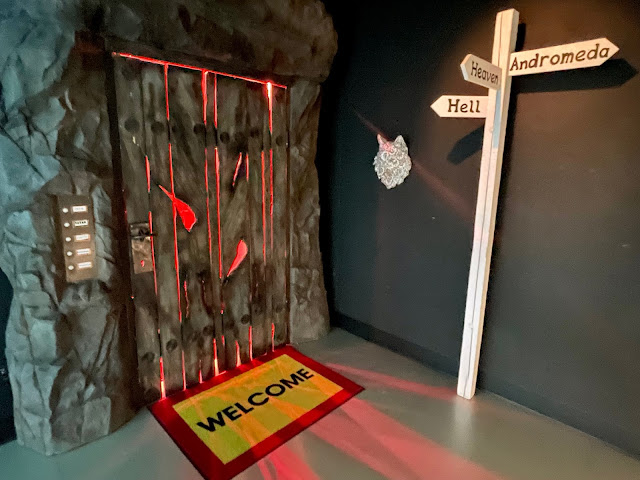 The Epic campus covered hundreds of acres with dozens of large buildings containing meeting rooms and offices. Each building had a theme of some sort and the common spaces of the building were decorated according to the theme. The general public was allowed to walk through these common spaces through a series of elevated walkways and tunnels. Above, we had just exited the Andromeda tunnel, passed by the gate of hell and were headed for heaven. You could ring the various doorbells of hell and get greeted by spooking messages but fortunately for us, the gate was locked at the time. 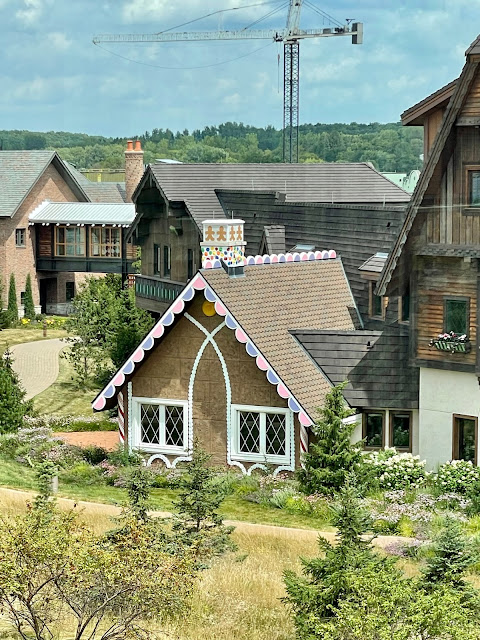 As we crossed a skywalk towards the Grimm Fairy Tales building, we saw a cute "gingerbread" house. 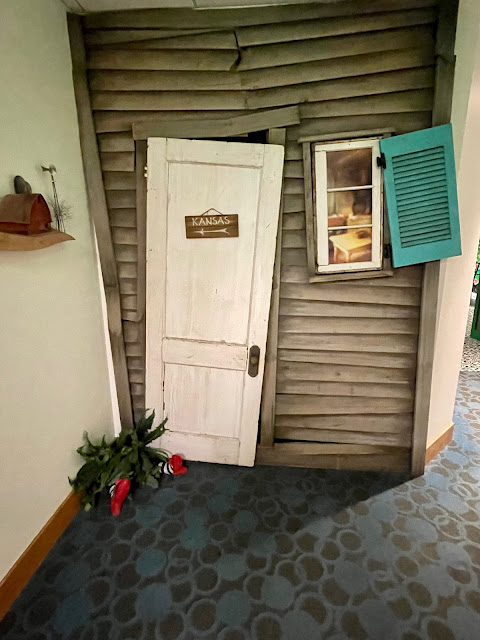 Eventually we found ourselves in Oz. While fascinating to see all the decorations, I couldn't help be troubled by the whole experience. Other than large meeting rooms, there were no cubicles or large rooms of working people. Everyone had their own private office with four walls and a door in these dozens of buildings. That fact was touted but I could instantly see how it created enormous expenses giving everyone their own private office. Combined with the sometimes elaborate decorations in the common spaces, certainly underscores why the Epic software is so very expensive for medical offices to procure. But it is quickly becoming the standard and will soon have a monopoly of medical record software. 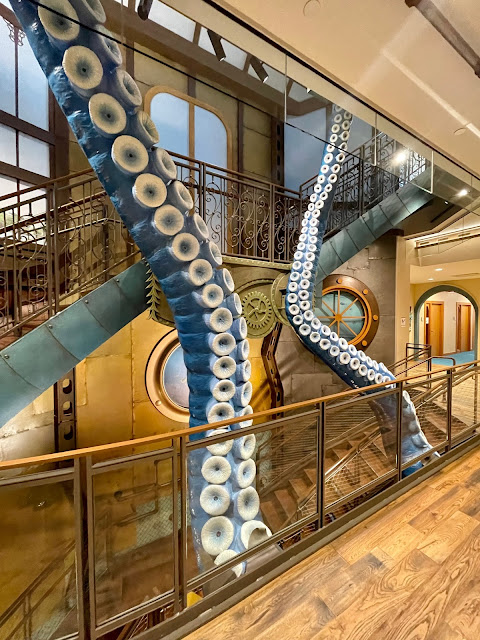 Jules Verne had his themed building along with... 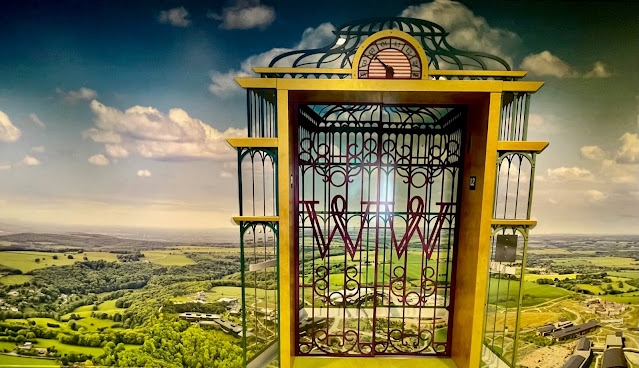 a Charlie and the Chocolate Factory themed building. We walked around a dozen other buildings and it definitely was a nice way to stretch our legs and get out of the car a bit before continuing our journey north. 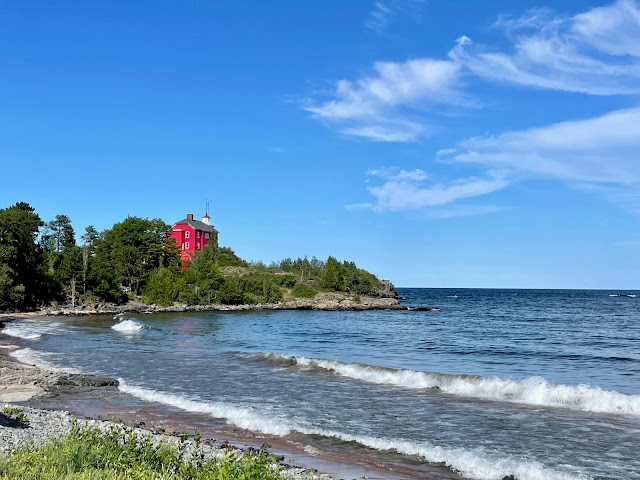 Our journey carried us though northeast Wisconsin where we stopped at our maple syrup supplier to pick up a case of their homemade maple syrup. Since my parents brought some home 35+ years ago in exchange for some of their honey, I have never been able to go back to the fake stuff found in supermarkets. We also stopped at the house of some friends where I once took a whitewater kayaking class for a week and say their woodworking and wool processing/dying shops. Eventually we found ourselves in Marquette, Michigan along the southern shore of Lake Superior for a couple nights. Above is one of the many lighthouses that studded the shores everywhere we went. 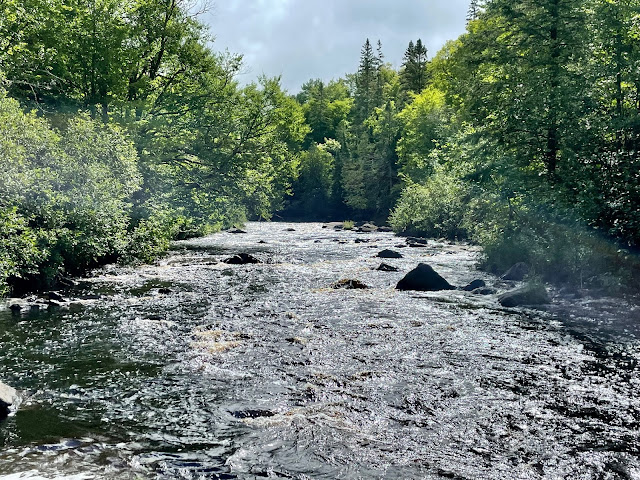 On one day we hiked along the Sturgeon River which was the color of Root Beer due to the tannins leached out of cedar tree bogs according to the internet. At the time I was mystified as to where the river was headed as it flowed due west during our hike away from Lake Superior. Back home, I was able to trace it's route much further west before it turned to the Northeast and eventually makes its way into Lake Superior. 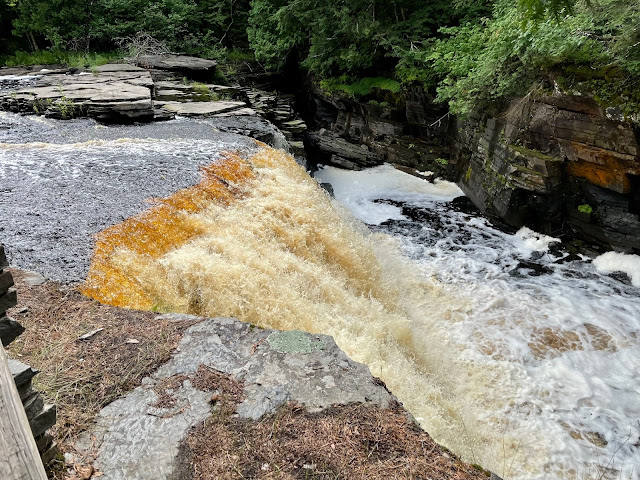 The river's color was a real novelty for me and Canyon Falls seen above really highlights the color difference. 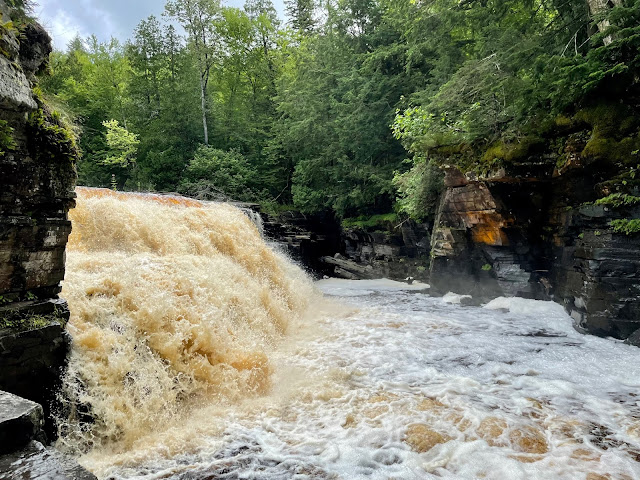 Back home if I saw a river that color, I certainly wouldn't want to touch anything in it or wet from its spray. 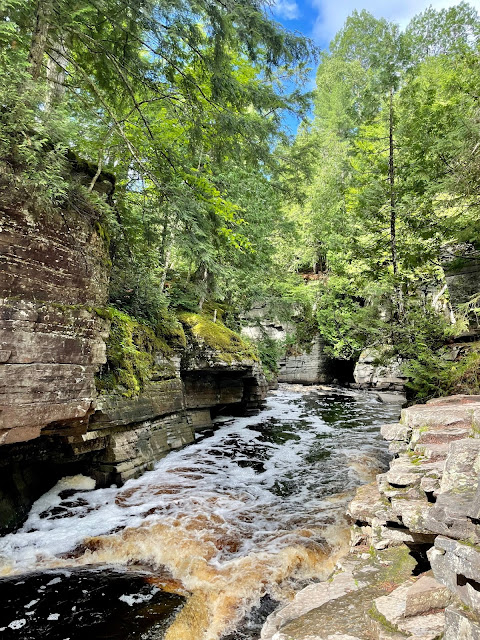 Also according to the internet, after leaving the box canyons below Canyon Falls, the river flows out into the flat boggy lands of Upper Michigan again before ending up in a series of lakes leading to Lake Superior. 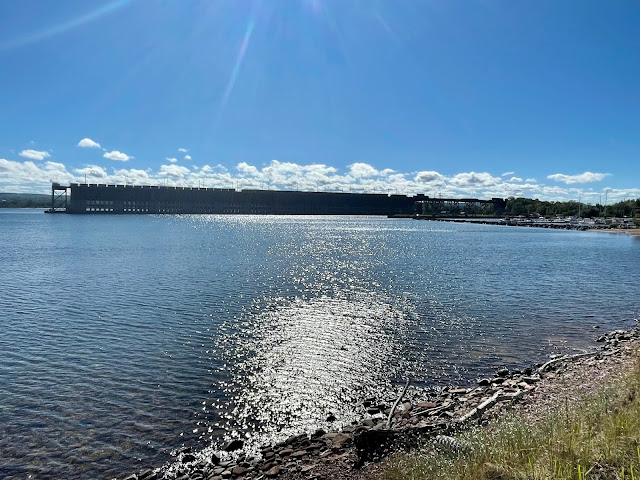 Another sight we saw were these massive structures built out into the bay near Marquette. It took a little bit of watching and learning from other stops on our trip to learn the function of these structures. Essentially they are a series of concrete storage bins for iron ore that are filled by trains that run out on top of them and dump their loads from the belly of the cars into the tops of the bins. 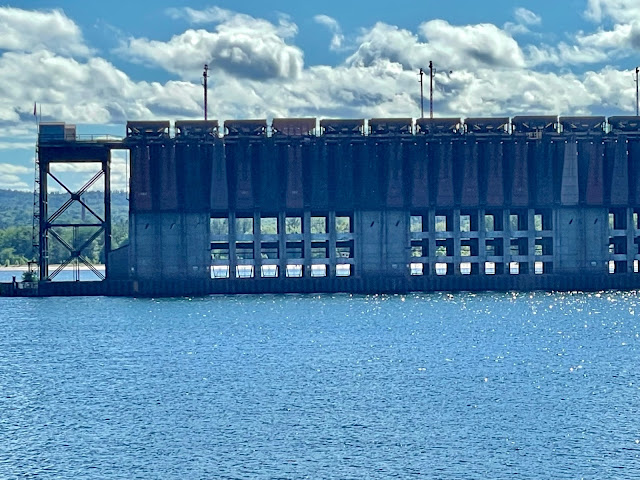 This closeup of the end of the structure shows things more clearly. Once the bins have been filled, a large ship will pull alongside and gravity will load the iron ore into the ship in short order. Later on in our travels, we will get to experience some of these ships up close and personal but more on that later.