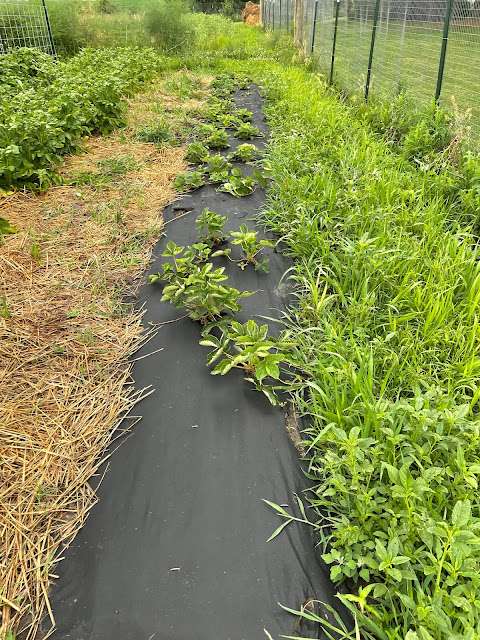 We planted some strawberries for the first time this year and planted them through landscaping fabric to control the weeds somewhat as an experiment. After weeks of looking kind of puny, they have started perking up at last. I normally mow the weeds on the right side of the picture but when I took this, it had just rained on us while we were weeding our squash patch so everything was wet. 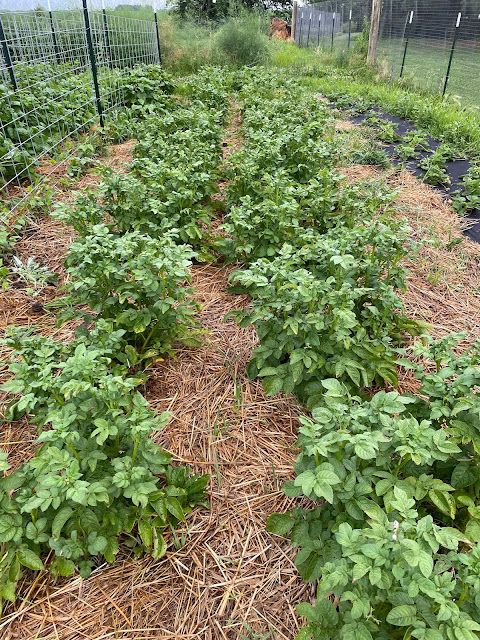 Our potatoes are doing great this year. The kids really enjoyed them last year so we had to plant a couple rows again this year. 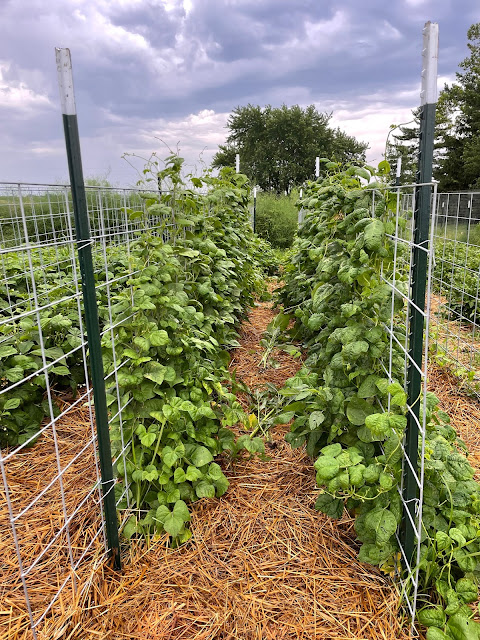 Our big experiment this year was planting dry shelled beans of various kinds and many of them were climbing beans and have proven to be just that. Others haven't shown much of an inclination to climb despite what the package said. I need to make note to save us the work of installing the fence panels next year if we decide to grow more. 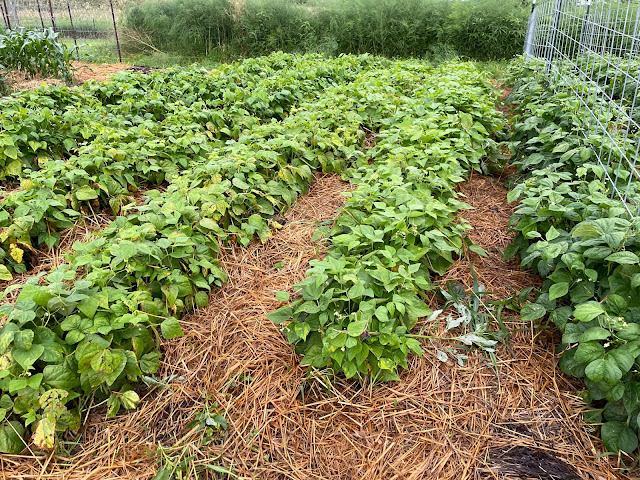 The rest of the dry shell beans are looking good. I sense a lot of work later this fall in picking all those beans. 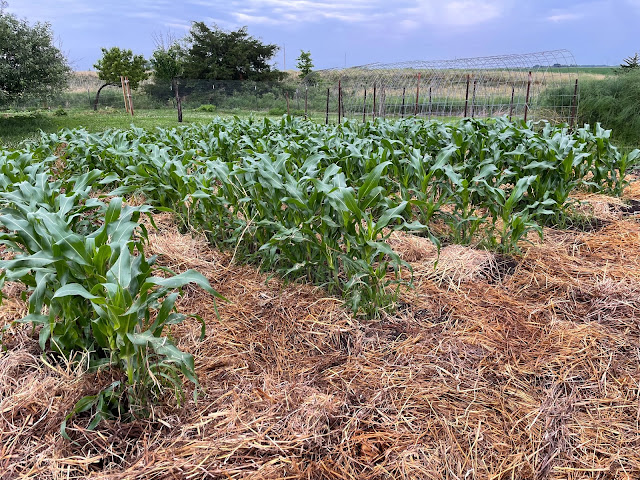 We planted several rows of raccoon hors d'oeuvres sweetcorn that are starting to shoot up. If it looks to be doing well later on, I may have to see about installing the electric fence up around them. 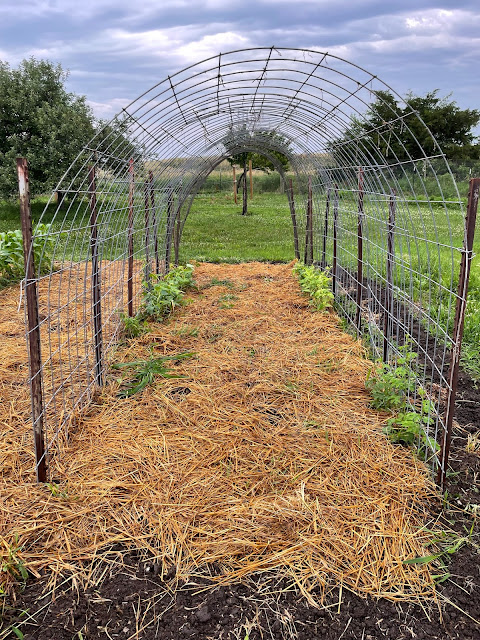 This is my wife's playground and I don't know what all she planted on our arched trellis this year. 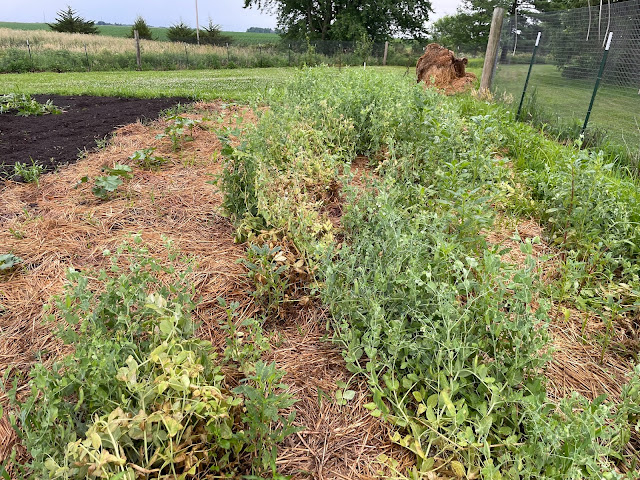 Do to the late start, our peas didn't do very well this year. We picked maybe a couple quarts of them but that will probably be all we get this year. Our okra plants are on the left. 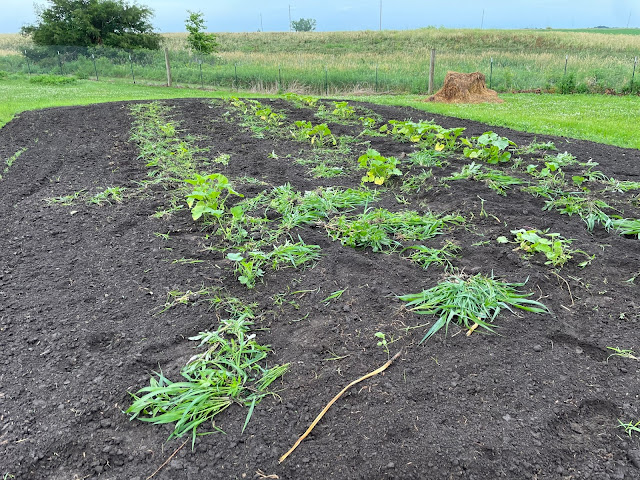 Our squash and melon patch post weeding. Fortunately I had tilled them last week though it was plenty muddy but hadn't weeded in amongst the plants. So we did that this week. Five minutes after starting, it poured rain on us enough just to make the top layer muddy and stick to our shoes in big greasy clumps. But since we were heading out on vacation and it would be a couple weeks before we touched them again, we persevered. 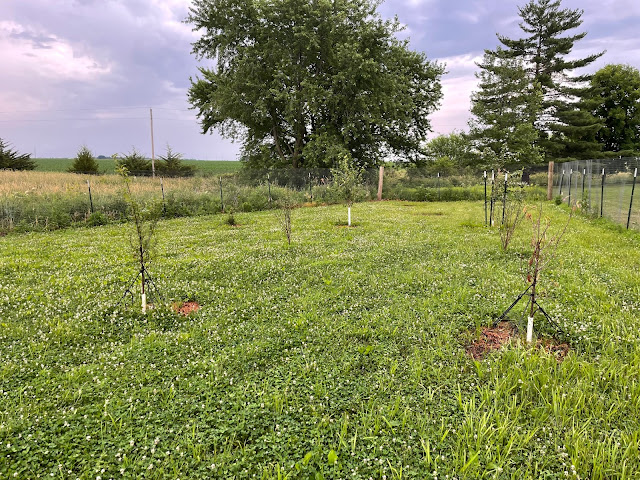 Here is a shot of our new orchard. The plumcot tree in the front right of this photo, a replacement we planted this spring for the one that had died last year, died. It was looking great up until that point so I'm not sure what killed it. The other plumcot to the left still looks great. At this point since we don't have any more warranty and now 75% of all the plumcots we have planted have died, we probably won't plant anymore plumcots. Perhaps they just aren't suited for the soil conditions we have here. 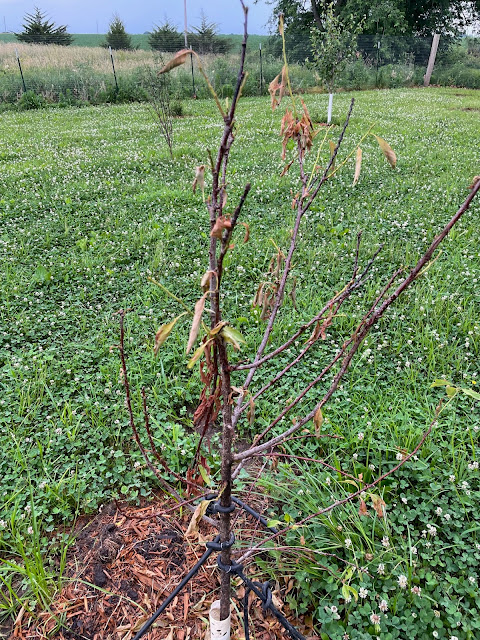 A close up of the dead plumcot that had green leaves last week. 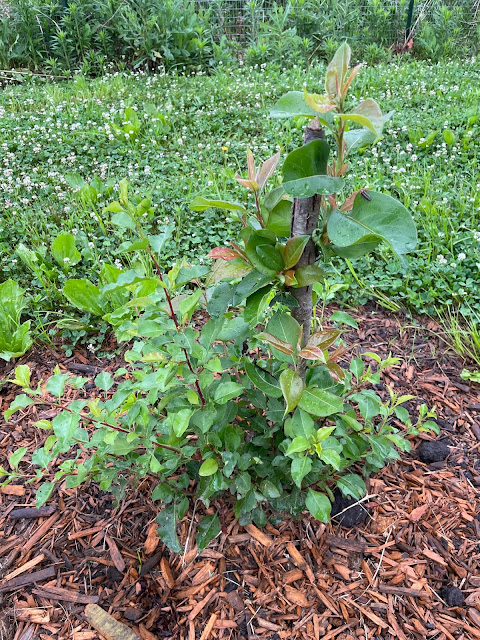 Above is the stump of a pear tree that broke off earlier this year and which I blogged theories about how. I cut the few strands of wood fiber remaining between the stump and top and tossed the top away. I actually gave a big pull trying to get out the stump but wasn't able too and since I didn't have a shovel with me, just left it. Last week while mowing, I noticed that it was starting to sprout a lot of leaves, two different kinds. One below the graft of unknown origin and some more pear leaved ones above the graft. 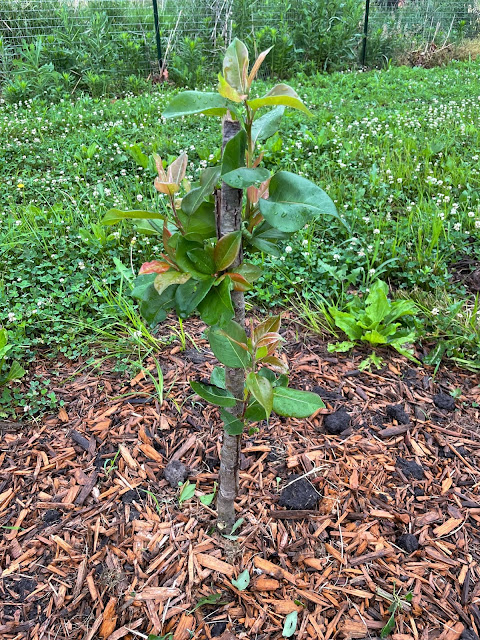 So I trimmed off the non-pear ones below the graft so it could focus the energy on the pear ones which we desire and will see if it can survive. I have my doubts but it looks so vigorous now I'm going to give it a shot. 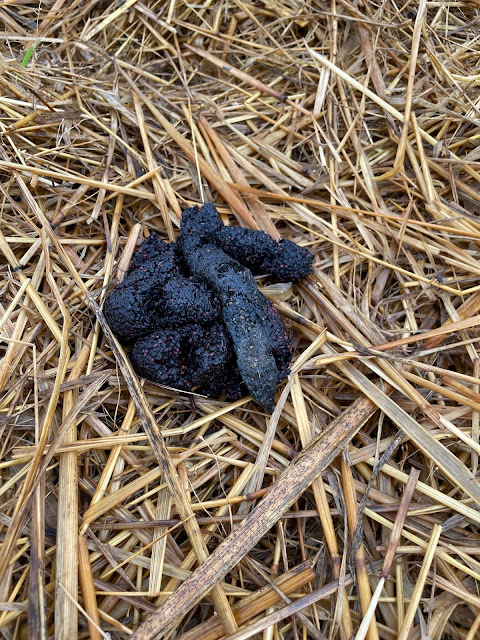 For some reasons, the racoons love to climb on top of our big round strawbales and relieve themselves. I'll flick it off as we gradually mulch the garden and every time I return the next week I'm greeted with another pile. I'm not sure if they are showing off, marking territory or just like the view from up there. 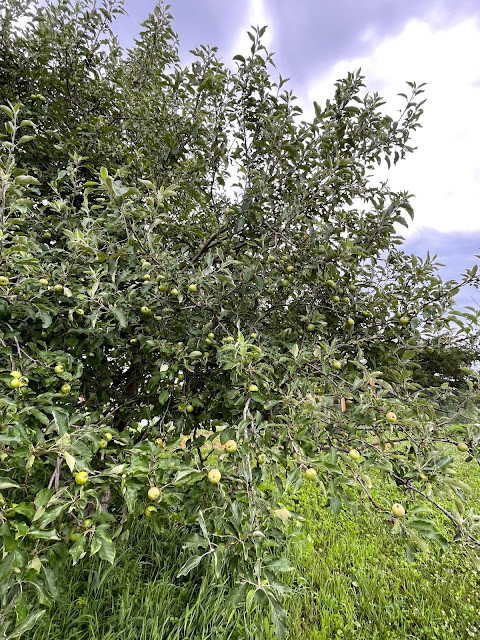 The lone remaining apple tree from our wedding orchard is loaded full of apples. I no longer remember what kind but they are a little tart and make excellent pies. Last year was our first serious year of actually harvesting and preserving those apples. Always before they were mostly deer food until we fenced them in along with our garden. This year I'm going to try a new technique for canning apple pie filling instead of freezing so that we can make a bit of room in our tiny freezer for other things. 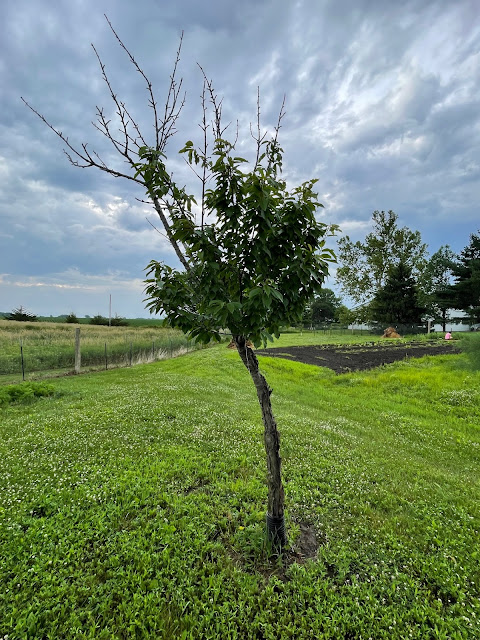 An old snag of a pear tree that also remains from our wedding orchard. It doesn't have much longer of an earthy toil but I'm not going to reduce that time either. Besides, there was a bird nest in it earlier this year though those birds have long since fledged and gone. 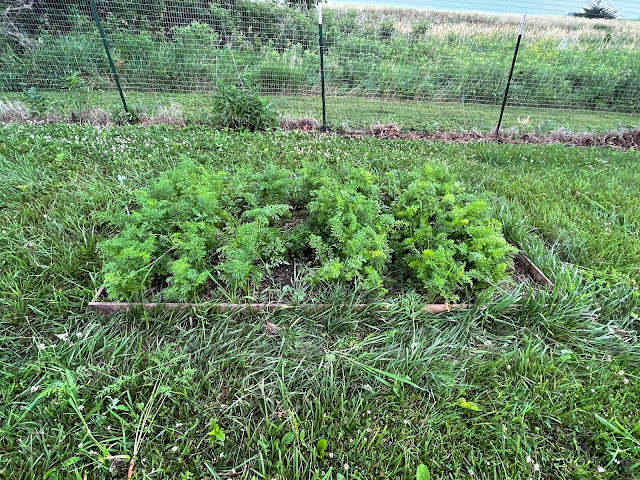 This was one of two strawberry beds I created last year that failed due to the seed company shipping us starts in the middle of JULY! Since we moved the strawberries elsewhere, the kids took over these two small raised beds and planted carrots. They have thrived and they thinned them out this time. I asked what they wanted done with the carrots and was requested to make a carrot cake with them which I did. 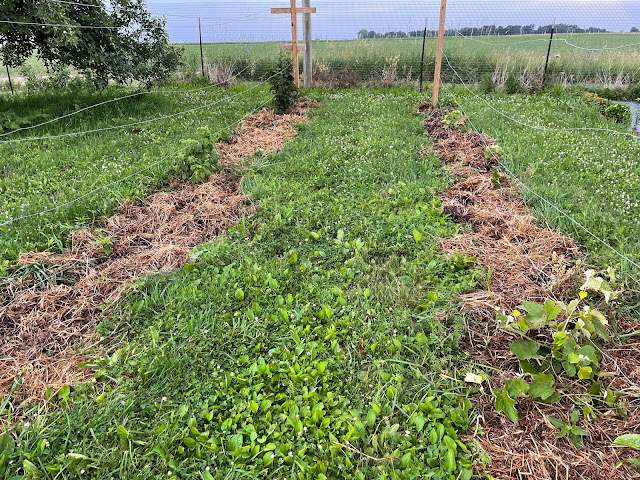 Our two rows of berries are slowly coming along. The tallest at the back left are I think blackberries we planted last year and the one in the closet front right is a grape vine. Both survived the winter. All the others we planted this spring. 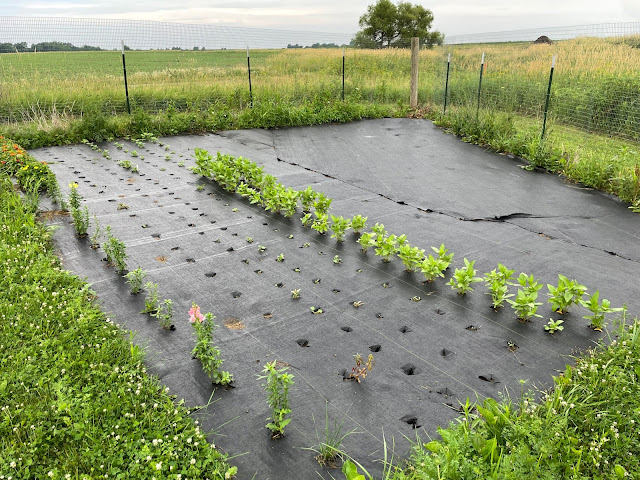 I don't think I've mentioned this in any of my posts thus far but in the far corner behind our old wedding orchard where it was just grass that I tried to mow regularly, my wife put down some landscape fabric and started a section for cut flowers, some she got as seedlings but most from seed. They are looking pretty good. 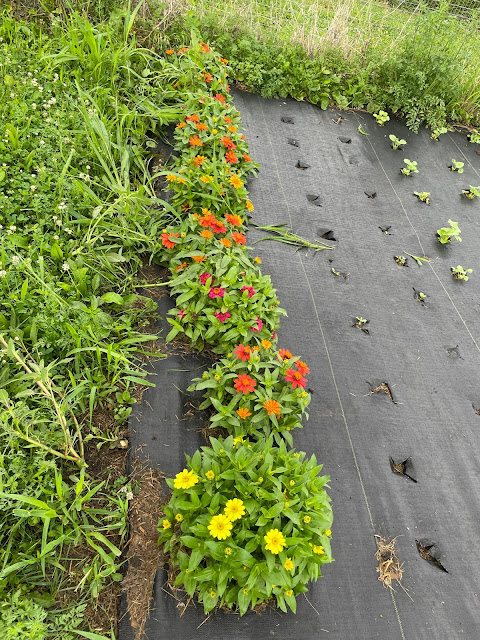 Almost lost in the tall grass/weeds I didn't get mowed due to the rain are the zinnias which are looking good. I think my wife is going to dig some of them up and haul back to town when we return from our vacation to decorate some hanging baskets around our house. 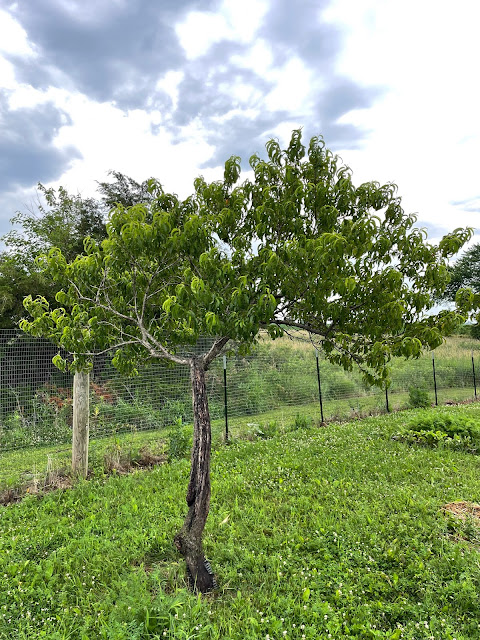 Another old peach tree from our wedding orchard still hanging in there. I don't see any signs of fruit forming on it or the other one so they remain more as full size bonsai trees. 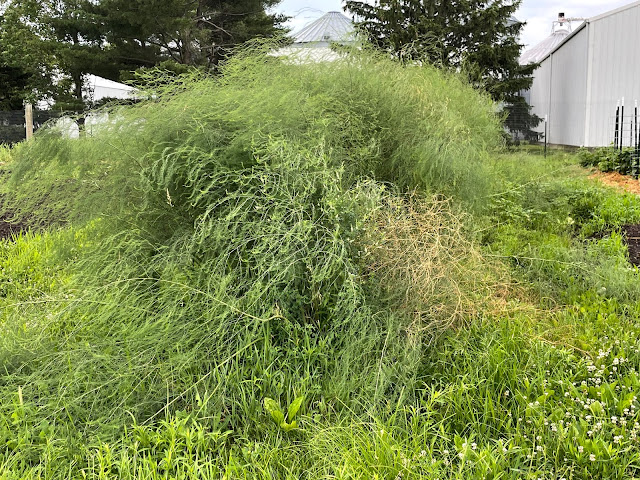 Just to make Debby jealous, our asparagus patch fully headed out and awaiting late winter time when we will burn everything above ground to get a jumpstart on spring asparagus production. 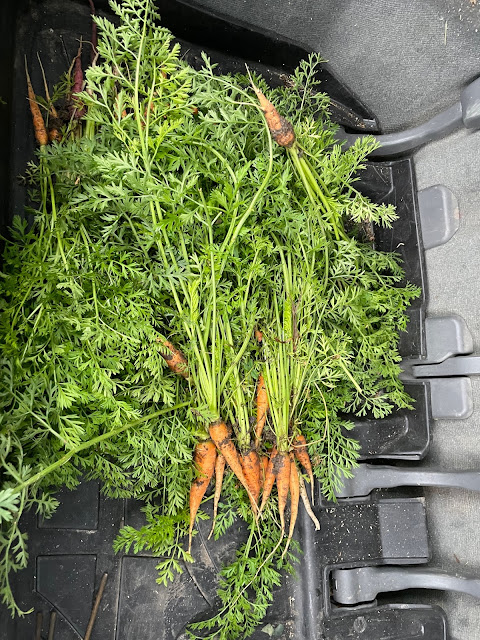 A double handful of carrots from the girls thinning that was later harmed to make a carrot cake. 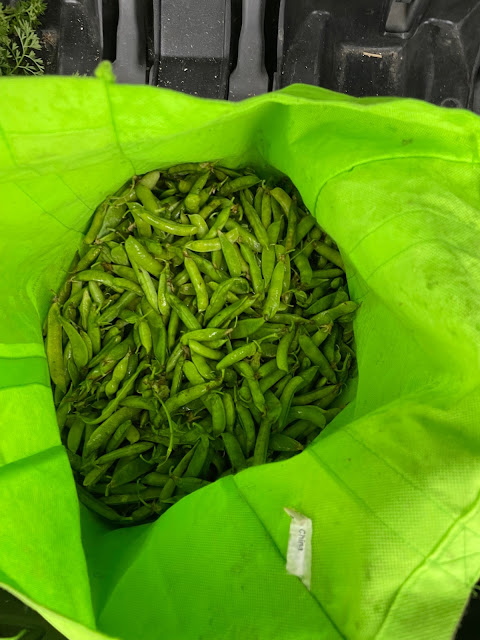 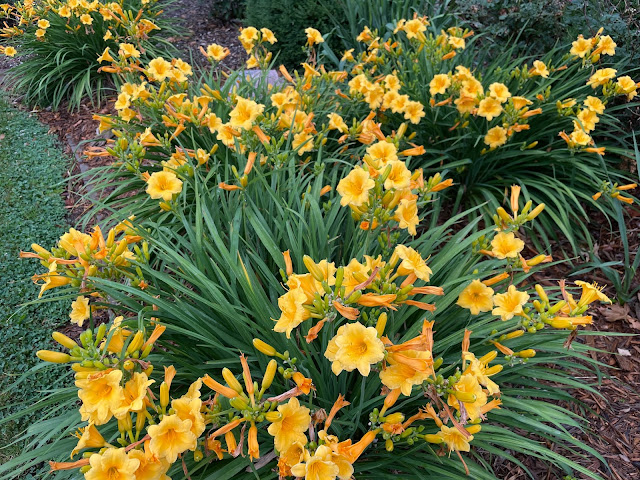 Finally, just a picture of some of my mom's lilies she planted up near the house. She would have loved looking at them if she were still here.