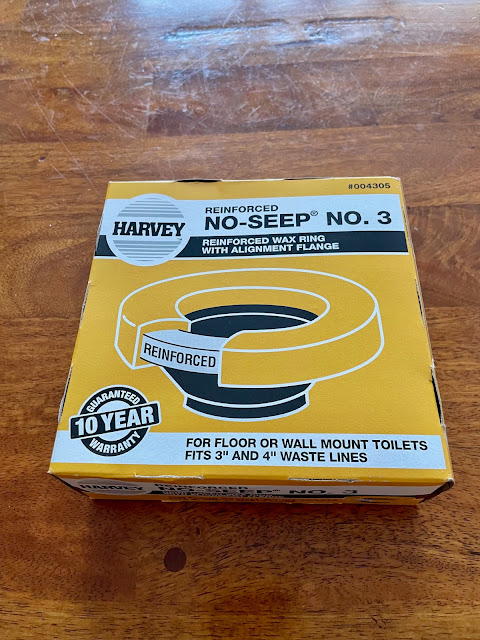 Not sure what is going on in our house but it hasn't been enjoyable. A couple weeks before our vacation, I went into the hall bathroom that our daughters use for something and noticed a puddle of water near the toilet. I cleaned it up and flushed the toilet a few times and it never came back so I chalked it up as somebody spilling water from the sink. A few weeks go by and then it happens again.  I repeat cleaning it up and flushing the toilet several times without nary a drop of water coming out and again chalk it up as something else happening. But the very next day my wife uses it and water came out from underneath immediately after she flushed so I finally admitted to myself that I was going to have to yank the toilet. However it was a national holiday followed by a Sunday and so I just put an out of order sign written on blue painters tape adhered to the lid and put it off for a few days. Fortunately we have two other toilets in the house.

As we were enjoying the fire during the blizzard, my mother-in-law mentioned that the toilet in her bathroom suite has leaked a few weeks ago. So if it happens again, she is now supposed to show me and I will have to pull that one as well.

Then last night, my daughter went to fill her glass with water out of the refrigerator tap and discovered that it wasn't getting any power, less than an hour after I had filled my glass from it. I went downstairs and found out that the breaker and two others had been apparently tripped and when I flipped them back on, power was immediately restored. I'm not sure what caused those breakers to trip and why now after nearly a decade of never having that happen. Ghosts perhaps?

So today before writing this, I spent my morning yanking the first toilet and putting in a new wax seal. When I had redone the bathroom years before, I had put in a new synthetic gasket and it had worked well until I guess it didn't anymore. I think the problem was that when I removed the toilet years ago during the remodel process, I had discovered the toilet flange was stripped out and so put a reinforcement ring on it to fix it. The reinforcement ring is two pieces and while a wax ring might have sealed the inconsistencies between the two pieces, the rubber and foam waxless seal didn't, at least not for as long as a wax ring will hopefully seal it. That is my hope anyway. It is now back in place and after several flushes, no leaks. I have taken a hot shower and scoured my body with a brillo pad but still feel unclean after wrestling with a toilet all morning. But I know from experience, the feeling goes away with time... and perhaps another shower or two.

Now if I can rid my mind of the thought of having to do it again soon with the mother-in-law suite toilet...