My Second Attempt At Number Two 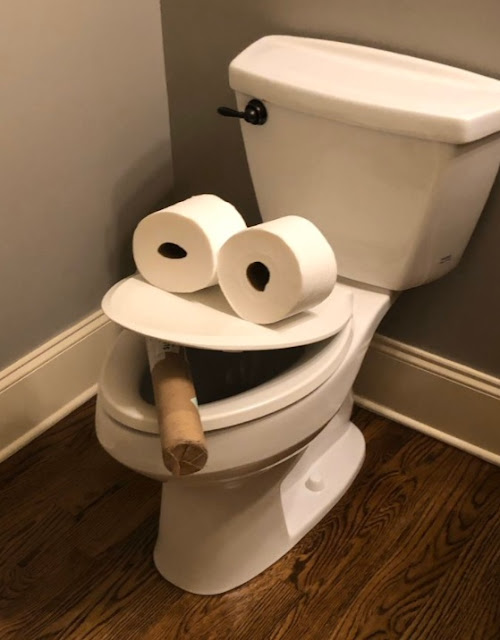 As mentioned in the last post, I pulled and replaced the hall toilet with a new wax ring and even tested it out. I left to retrieve the kids from school and found a puddle of water in the bathroom again. AAAAAGH!

So I turned off the water, mopped up the water, and spent a restless night mulling what could possibly be wrong. The flange is flush to the flooring and the toilet standard so a standard wax ring which I put on should have been adequate but evidently not. Perhaps it was the two piece reinforcement ring that was causing the issue. Was it leaking through the overlap in pieces or between the reinforcement ring and the old stripped out flange? Too many unanswered questions led to tossing and turning all night long.

The following morning I stopped by the hardware store yet again and bought a thicker wax ring along with new flange bolts and covers, and a reinforcement ring that was one piece. Back home, I scooped out all the water in the tank and bowl... ugh, and after disconnecting all the connections, removed the toilet for a second time in as many days. The wax appeared to have adhered well enough so I finally decided it was the reinforcement ring that was causing the issue. I removed it and went to put in the new one only to be reminded once again that our house has three inch waste lines and not the standard four inch waste lines and the reinforcement flange I bought was four four inch waste lines. I've run into this issue before and nobody carries stuff for three inch waste lines anymore.

So after figuratively scratching my head as I was avoiding touching anything of value with my hands at this point, I finally decided to reuse the old reinforcement flange and this time apply some waterproof silicone caulking between it and the old flange as well as smeared around the transition between the two pieces and thus making it hopefully watertight from where the new thicker wax ring will sit on down. I reinstalled the new wax ring, toilet, fittings and cleaned up my mess. I flushed the toilet and no water leaked out until the tank started filling and all of a sudden water appeared from under the bowl again.

In short order, thoughts of having to pull the toilet again, perhaps just throwing it out the door and buying a new one, to getting a professional all crossed my mind. I wasn't sure what I wanted to do so I knelt down and bent over to turn off the water when I saw it was leaking from the infill line onto the floor in a small rivulet of water. Huh? I grabbed my tools and gave it an extra half turn and mopped up all the water. I flushed the toiled while laying on the floor so I could see everywhere, FOUR TIMES, and no water appeared anywhere. Hopefully the second time around is the charm.

But I am left second guessing myself now. Had a loose water inlet connection been the problem all along? I wouldn't think so because I would think the water would leak out even if the toilet wasn't in use and I don't think that was the case, at least until the previous test. I don't know for sure however and frankly right now, as long as I don't have to get close and personal to that toilet again in the next decade, I don't care. I'm going to take a hot shower or two and perhaps a stiff drink to try and forget the ordeal of the last two days.