I am lucky to have a compiled history of my grandmother's side of the family done way back before computers and the internet were thoughts. I don't know the exact date though the author, the granddaughter of the man above, has been dead since 1965. I thought it time to combine my (modern day) research with her old school research and flesh out the story of one of my immigrant ancestors.

Johann Christian Buchholz was born in Pankow, Germany on 17 Nov 1815. I don't know his parentage for sure though I have found one record listing a father named Johann Georg Buchholz. The problem is that it is a transcribed index and no way to affirm that the child Johann Christian Buchholz is my 4th great grandfather other than they have the same name. He was probably a farmer as listed in his immigration records and he and his wife Maria Elizabeth Buchholz immigrated to America on 28 April 1869 on the ship SS Westphalia along with their four children Fritz, Carl, Friedke and August along with older half sister Minna. Wife Maria has been married two times previously and had a child from both marriages, Minna Crouse and Joachim C Busse. Joachim had already immigrated to America some two years earlier and lived near Johann's sister Christina who had immigrated 13 years earlier in 1856. No doubt the boat was full of numerous other cousins too but I won't go down that rabbit hole with this story. 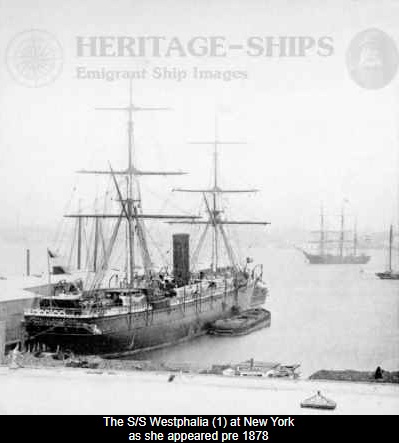 The SS Westphalia was launched on June 24th 1868 and had made six prior trips to America with immigrants before my ancestors boarded on her 7th voyage. She was a singe screw iron steamer with 3 decks built to haul around 740 passengers between first, second and third class and had a crew of 120 passengers. My ancestors stayed on "Zwischendeck" which translate as "tween deck" or steerage which is what third class passengers were called.  The ship my ancestors came over on was unknown to the granddaughter of Johann Christian Buchholz but thanks to search engines and massive efforts to digitize old records, it is now readily accessible.

Johann, Maria and kids landed in New York on 11 May 1869 and proceeded directly to Iowa where their relatives already resided along with a sizable German population. Johann (who soon went by John) was 53 upon their arrival and wife Maria was 55 so I'm not sure what they did upon their arrival. Records are scarce at that time and Maria had died nine years after their arrival in 1878 and by the early 1880's, John was listed as retired and living with youngest daughter Frederike. After that, the only record I have of my 4th great grandfather John Buchholz was his death on 21 September 1897 and burial in the Beaver Grove Cemetery in Butler County Iowa. The newspaper briefly stated, "the father of A.F. Buchholz died Tuesday evening." I presume that he is buried by wife Maria but have not been able to turn up her burial record or visit that cemetery.

A.F. Buchholz or Fritz as named on his immigration record or Albert F. as he called himself in America was 18 when he made that voyage across the ocean on the SS Westphalia with the rest of his family. He is my 3rd great grandfather and stirred up much debate among the family genealogists on his life in Germany before leaving. He also had one of the most memorable deaths in my family tree that I have written about before but will save for another post. Stay tuned.