Albert, as he went by later in life or Friedrich as his birth name was listed in church records or Fritz as the immigration people listed him, was born in Germany on 19 July 1850 in Pankow, Germany. Not much is known about his early life though according to the family history book, a school copybook has been passed down to his granddaughter and in it he wrote lots of things evidently including perhaps a previous marriage to someone of higher class and an illegitimate birth of a unknown boy. But it was written in high German and difficult to translate and three of his four living daughters would vow that he was never married before coming to America. Coincidentally, the one daughter who thought he had been married in Germany was my second great grandmother who, like all his children, was born here in Iowa and never set foot in Germany. My guess, having been a school aged male once upon a time, is that the copybook was a wishful thinking sort of story written to liven up a boring school day. It also helps that no records have been located to support this prior marriage anyway.
As I wrote in the last post, Albert was 18 when he came across the Atlantic with his parents and siblings in 1869. They landed in New York and wasted no time in traveling to Iowa where Albert's story can be picked up. Unfortunately, I haven't been able to locate a census record for them in 1870. I'm assuming they were either still on the move towards Iowa or were so new to the area as to be missing in the census. Where they would end up in Iowa though there were a half dozen or more Buchholz families and countless other German families that were no doubt cousins and assorted family who had made the journey before them.
I do know he became a citizen of the United States on 2 October 1876, two years before his mother died in 1878. The next record I have is his marriage record when he marries into a blue-bellied Yankee family that extended back before the Revolutionary War by marrying Amanda Jane Thomas. I've always been a bit curious as to how they met and courted, being from two completely different backgrounds and separated by 11 years, but I'm pretty sure I'll never know that story. What I do know is they married on 9 September 1880 when Albert was 30 and Amanda was 19.
They moved from Northeast Iowa to Northwest Iowa and started farming and producing offspring for several years before moving back to be with the rest of the Buchholz clan. No reason for this sudden move and return other than a notice in the paper saying he sold the farm and moved back. They farmed another four years on a new farm before moving yet again to a farm previously owned by Amanda's mother Susan Thomas and stayed there for another six years. Next came a period of years in which they constantly picked up and moved, never very far at any one time and always within the same county, for a total of six times. The also continued to produce children and eventually has seven, two of which died at or shortly after birth. My second great grandmother, Mary Buchholz was born on 6 February 1889 and was involved in a story involving runaways and the circus but that story can wait for another post.
By this time it was March 1904 and Albert at age 54 was ready to give up the farming life. He bought a place in town and went to work for the Illinois Central Railroad as a section hand. But less than six months later he was dead and died in a very unique way. According to the family history book, Albert and Amanda were preparing to move things from the farm into town and Albert was chopping up odds and ends of kindling he intended to move with him. The axe he was swinging caught on a clothesline and somehow the blade ended up penetrating his skull with a gash four inches long.
Initially he appeared to recover from the accident to the point where he could dress himself and move around as he pleased. But then a blood clot formed and caused a paralysis of his left side. He was operated on and the blood clot and a piece of bone causing the paralysis were removed. As he lay in bed after the surgery, hot flat irons were wrapped in towels and placed around his body to keep him warm but one of them either slipped from the towels or was simply too hot and burned his leg quite badly. He was still unconscious from the surgery but yet kept reaching down to his leg which finally clues someone that something was wrong and the hot iron was removed but by then the damage was done. He never woke up and died 10 days after the initial accident on 10 November 1904 at age 54 years, 3 months and 22 days. He was buried beside his father and youngest child Lucille (born and died in 1901) in the Beaver Grove Cemetery.
I'm not sure what became of the house in town. After the accident and surgery, Albert had been moved to his father-in-law's house where he died. After his death, wife Amanda collected on a $1000 dollar life insurance policy and bought a house in another nearby town where she spent the remainder of her years before dying of bowel cancer on 7 October 1913. 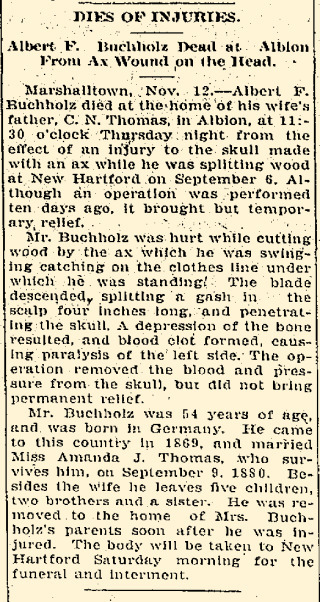