The Funeral That Still Isn't 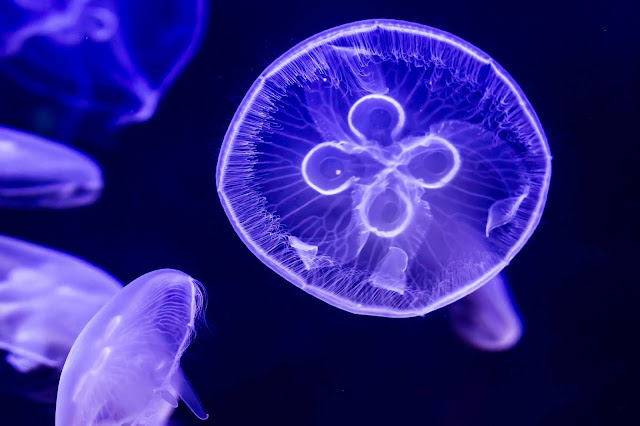 The above photo is a stock photo and not a picture I took of my daughter's moon jellyfish. She has really enjoyed raising her jellyfish and I must say, I've enjoyed learning about them too. Although it has been around five months, we've had our share of scares. My daughter monitors their water chemistry fairly often to keep it within the narrow bands they require and occasionally it has spiked causing fear and frequent water changes. But each time, my daughter is able to get things back in control and learn from the experience as to what caused the spike so not to repeat it.

Still, they have continued to shrink in size which isn't normal. My daughter increased their recommended feed to four times what she started out at and still they continued to shrink to just a fraction of their original size. Right now we aren't sure if it is the quality of the food or feeding method. If you overfeed jellyfish, they just excrete their undigested food into the water, I guess to make room, which causes nitrites to spike. We are also told that jellyfish can go days without eating but most feed them once a day. Since hers are shrinking in size, she recently switched to twice a day but lowered the amount of feeding so it is still a 50% increase in the amount of food and six times what she started out as but less than she fed them under the once a day regiment. Hopefully this will stabilize the shrinking jellyfish.

To complicate matters, jellyfish don't take stress very well. A couple have gotten an air bubble under their bell shaped heads and those immediately develop into holes clear through them. But all have gone to regrow tissue and repair those holes. But one Jellyfish, seems to have leg problems. It initially came with only two of the four standard issue legs when we opened the package. However, it regrew them without any problem and soon had four nice long legs which they use to pick food out of the water with and move towards their stomachs, those four horseshoe shaped bright areas in the picture above. Then it got stuck in a grate on the back of the tank and lost another leg which it eventually regrew. However a week or so ago, it lost all four legs at once and we aren't sure why. Stress perhaps. But without legs, we were worried that it wouldn't be able to collect food and thus wouldn't survive and my upcoming funeral comment. But my daughter keeps squirting food at it and it is still hanging in there. In fact, there is already a nub of a leg starting to reform.

So perhaps rumors of the jellyfish's demise were a bit early and it will pull through it. According to my daughter, moon jellyfish typically live 6 months to a year in captivity and we are quickly coming in to the lower end of that range. She has also done research showing that other jellyfish wranglers aren't really happy with the place where we got these and have moved on to sources that have healthier jellyfish and better food. So we wait... and see what happens.