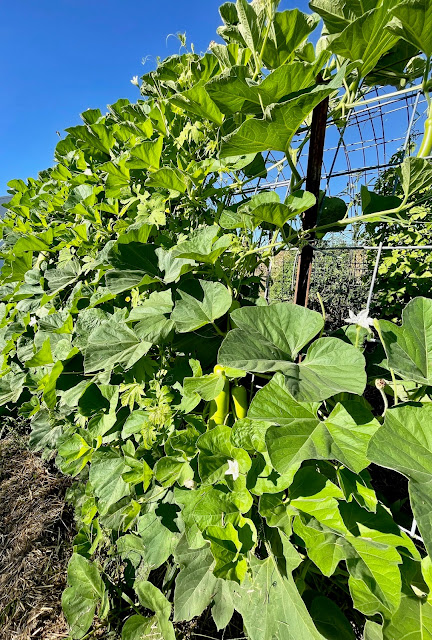 Upo: Lagenaria Siceraria, also known as bottle gourd, is a popular vegetable originating in Asia and is the only thing known to be more prolific than zucchini. It's green skin and white flesh is used in many Filipino dishes for the first week of production. After that, growers are generally overwhelmed by the sheer volumes it produces and resort to dumping it off at the doorsteps of unsuspecting Asian families just to get rid of it. Growers must exercise caution and stay in motion when around producing upo plants or risk being covered in vines and desiccated in the plants efforts to produce even more fruits.

Besides asparagus and potatoes, the other overwhelming success in our garden this year has been upo which I made up a definition for above. I have literally never seen anything like it and I have grown zucchini before! The vines started off very slow in the cold west spring we had and even into mid summer they hadn't produced a single fruit. But in the last few weeks of summer and the first week of fall, it is like they are making up for lost time. Each week, we pick about what you see below in the two baskets and the pile between them. Just one of those is enough for a couple meals in our family so there is no possible way we can consume it all. Filipinos cube it up and sauté it in a wok in various dishes but I'm not sure of a way to preserve it beyond that. Canning it would turn it to mush and I don't think they would use it if I dry it. Freezing is out as we already have a freezer full of other things.

So we started out by selling it at a local Asian grocery store which worked but word got out and soon we were giving it away to Asians in a ten country region in SE Iowa. Even that wasn't enough to get rid of it all and it has been piling up in our pantry. With today's picking below, I probably have about five baskets brimming full of the stuff. I think my wife is going to take it all back to the Asian grocery store and see if they will pay us a pittance just to get it out of our house before an avalanche in our pantry buries someone alive.

On a serious note, our arched trellis made of steel fence posts and metal hog panels has been such a success, I'm thinking that next year we should build another one or expand this one. Another project to add to my never shrinking list! 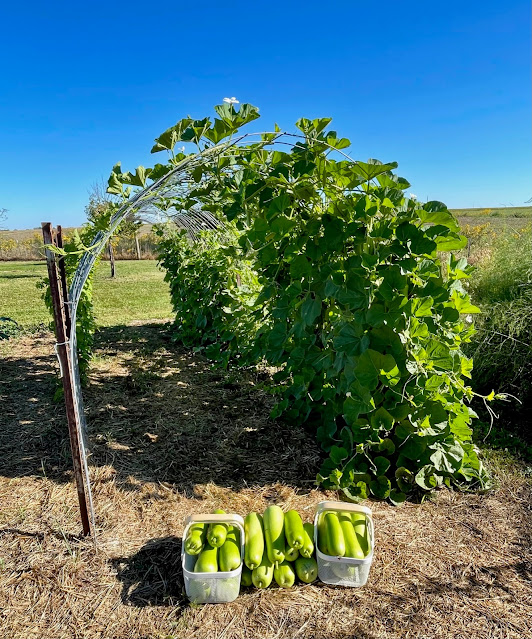