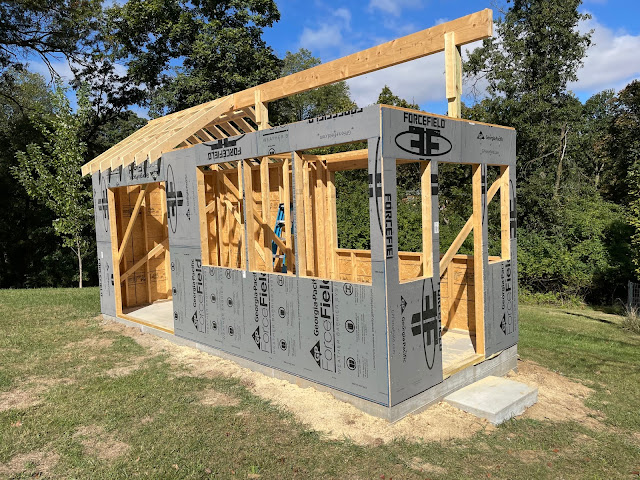 With the exception of the gable ends, I finally got the exterior of the building sheathed and ready for application of siding, windows and doors. It wasn't without problems however. When I was trying to calculate how many sheets of plywood I would need to sheath the entire building, calculating it made my head hurt. So I figured I would order what I felt would cover most of it and then estimate how much was left and order that. It only had a lead time of a week the first time around and I knew I could haul the remainder in the minivan to avoid another delivery charge. So I put up what I had, calculated what I needed and place a second order.

The lead time on the website had changed from one week to three weeks but I didn't think that would matter as I had other places I could focus my attention on. But three weeks later on the last day of September, my order switched from being delivered on September 29 to just being on order. No notification except that change of the order status when I manually checked myself. So I called up the store and was told that the soonest they could get in the five sheets I needed was probably going to be around Thanksgiving time! They didn't know why and couldn't offer any alternatives.

I wasn't about to wait for another seven weeks just for sheathing so I looked at other (of the same name) stores around and found one about 60 miles away that had exactly five sheets on hand. I called down to verify first and then hit the road. About five miles from my destination and literally probably less than a minute ahead of me, a four car pile up blocked the road (fortunately nobody seriously hurt) delaying me by nearly 90 minutes but I was able to obtain my sheathing material. Back home I called my local store and canceled my order and got to work. I wanted to get the rest up so I didn't have to use spacers for my rafters to account for the thickness of the sheathing. Next, I am going to get back on the rafters and hopefully get the roof installed as soon as possible. Then I can put the last of the sheathing up, windows and doors and have a weather tight building. After that, I can rest easy.