Putting Up a Beam

I was able to lift the beam into place, four pieces at a time and it went relatively smoothly, more smoothly than I anticipated. Part of that is because I fastened on some temporary pieces to cradle the ends of the beam until I could get it fastened in place. Another part is that they were longer than each of the rooms so I could get them lifted part way up, readjust as needed, lift one end into the cradle, readjust and then lift the other end into its cradle.

But it wasn't without its setbacks. For some reason, I designed it for 2x10's and order 2x12's. While the latter is stronger and only cost perhaps $10 more for all four pieces combined, it did affect my plans in subtle ways. The ridge is 2 inches higher than planned which means the roof pitch is a bit steeper and all my roof joist calculations are now off. This wouldn't be a big deal but the beam boards of course are cupped and twisted in places which complicated finding out where they theoretically should be in space so that when my roof joists are in place, everything is in a straight line. Long story shortened, it meant a half dozen trips back and forth between shed and garage and dozens of climbs up and down the ladder to determine the correct geometry as best as I can figure.

All that finally caught up to my aging body and I pulled something in my knee during one of those trips up the ladder. It isn't terribly painful but it is such that I didn't feel stable enough to continue putting up joists beyond the four (not shown) that I got done. I'm giving it some rest and spent time cutting out some more rafter joists in advance so that when better, I can get a better start. 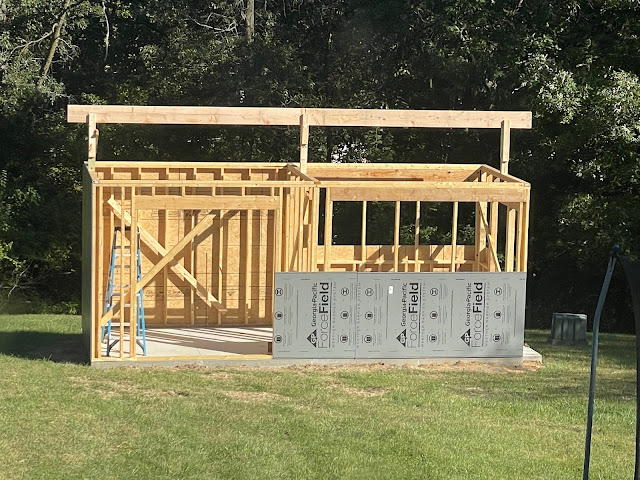