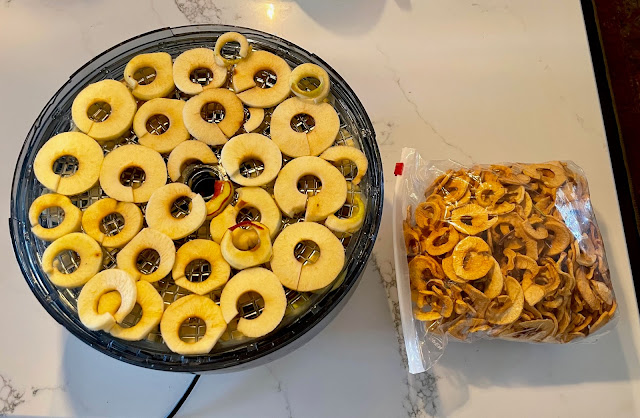 According to the resident expert, I probably ruptured a cyst in the muscle on the backside of my leg and needed a couple days off to let it heal. So I focused my efforts on inside projects, starting with the preservation of a couple bushels of apples we picked off our apple tree at the farm. We don't spray them so they get a good bit of insect damage which doesn't make for an appealing eating apple but with our hand crank corer and peeler, it cuts them into spirals where it is fairly easy to cut the bug eaten bits out of them. I loaded up our freezer with premade apple pie filling so later all we have to do is make a crust, dump in the filling and bake. With the rest, I have been dehydrating them which doesn't take a lot of effort but does take a long time. It takes about a full day and a half per batch of apples to dehydrate them down so when one batch is done, I load it up immediately and keep it running. I have probably done about three gallons zip lock backs of dried apples but until recently only had the one seen above. We just kept eating them as fast as I was getting them dehydrated. This morning I finally had to start a second bag when I unloaded the next to last batch of apples.

We buy all our chickens from a local grower who free ranges them and tries to keep them as organic as possible. We place our order in the winter and usually pick them up during the summer but this summer, the weekend for slaughter occurred while we were on vacation and so they kindly bumped us to their fall schedule. On the arranged day, we just have to show up with our cleaned out cooler and they pull already slaughtered chickens cooling down in a tub of ice water out and weigh them as they dump them in our cooler. We drive home and break down a good share of them so that they are ready to cook in various dishes and leave just a few to roast whole. When we break them down, we end up with parts that aren't very appealing to use like backs and necks so I toss all that into a pot with some leftover veggies we had on hand and cooked them down into a broth which I then canned. My mother-in-law proceeded to pick all the very tiny bits of remaining chicken from the bones and she will use that to make some Filipino dishes. Nothing went to waste. 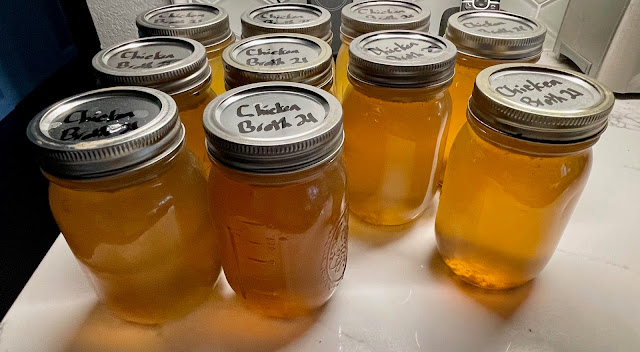