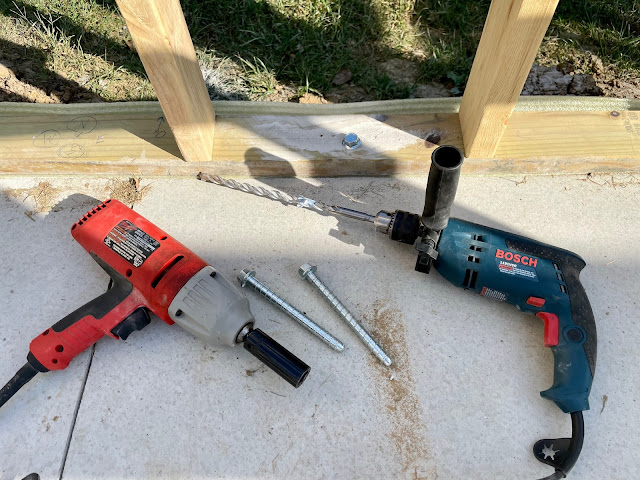 Up until this point, all the frame work has simply been sitting on the concrete slab. It was what I call a calculated risk. I could have anchored all the sections immediately upon putting them up but that wouldn't allow me to tweak things if I needed to later on. Or I could get all the walls up and tweaked to be square and plumb and then risk the possibility of a high wind coming along and blowing the entire thing into a splintered heap into the nearby woods. So I had made a calculated risk and left things sitting just on top of the slap with an eye on the weather forecast and tools ready to go so I could anchor what I have if high winds were forecasted. Fortunately they weren't around during the four days I spent framing up the walls.

I was brought up by a father who used J-bolts to anchor things to concrete. This requires sinking the hook part of the J-bolt down into wet concrete and leaving the straight end exposed, precisely where it was needed later on to apply a washer and a nut. Having done this many times with a small crew on the farm, it is precise work that needs to be done in a hurry and if you mess up and get off, well then you have to jury rig things to make it work. I didn't want that hassle or level of precision.

Fortunately I was watching a YouTube channel that I normally do a few months back and they used the above anchors for a house they were building. They simply drilled a hole in the concrete after everything was where they wanted it so there wasn't a need for any precision. So all I needed was a hammer drill to drill the holes and an impact wrench to screw the anchor down to hold the structure to the concrete, both tools I already owned. So all I needed was a half inch concrete drill bit and the anchor screws.

The entire process took only about 20 minutes not counting the half hour spent driving downtown to obtain a concrete bit that would work for my drill. (The bit I bought ahead of time over the internet was evidently made for a different type of drill.) Because I had all my studs in place, there was no complicated head scratching to figure out locations ahead of time that wouldn't interfere with a stud or be too close to a stud that my tools wouldn't fit. The anchors were pretty pricey and I ended up being short three so I have to get another full box, further increasing the cost but it will be worth it and I will have some extras. My dad is getting ready to build a storage shed down on his property by the cabin so maybe he can take the extras off my hands. It was well worth the experiment and the structure is now rock solid and the wind that will sweep it from the foundation will be the same one that takes my house too so I hope I never see that day.