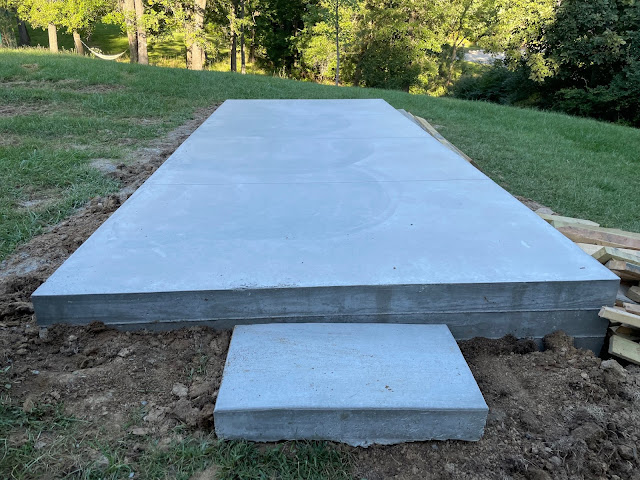 When in the planning stages for this project, I was deciding how to get materials on site. I haul a lot of stuff in our minivan but it can't haul a lot and using it as a work horse of sorts is hard on the interior of it. I figured I probably could have hauled everything I needed in it but it would have taken a dozen or more trips and even then, some of the larger stuff wouldn't have fit inside and I would have to figure out how to get them home. So I made the decision to just order it all at once from our local big box store and have it delivered.

I placed a large order which was immediately broken into 17 suborders of which I get notifications on a nearly daily basis that one component or the other is ready for pickup, even though I chose and paid for delivery. I even stopped by once to verify everything but the person running their software seemed to know very little about anything and didn't leave me with much confidence. But the soonest I could get the bulk of the framing materials is still a few days away and so I wait for that day before I decide what the next move is.

Until then, I stripped the forms off the concrete and piled it up next to the slab to hopefully be reused here or there. I also moved my step into place which was a bit of a miscalculation on my part. When coming up with an extra form for overflow concrete, I just cut some boards thinking that would make a nice sized step. I wasn't wrong on that aspect. But I neglected to understand the weight of said step and how I was going to get it from point A to point B. Fortunately the concrete guy talked me into moving it from near the driveway where I had it initially to much closer to the greenhouse. Only later when I did a back of the envelope calculation did I realize that it probably weighed somewhere in the neighborhood of 350 lbs!

Fortunately I had laid a sheet of plastic underneath it so it wasn't adhered to the grass and dirt below it and I was able to muscle it up on end and then sort of shift it and crab walk it towards the slab where it fell into place. With a few more pries with a long rod, I was able to slide it the rest of the way into place. I had great ideas of creating a nice level bed for it using some of the extra form sand I have but it fell in such a way it has no wiggle what so ever and is only slightly off kilter to one side. Not really noticeable unless you see the form lines on the concrete. But I sure didn't feel like trying to get it upright again and hold it with one hand while making things more level and risking getting squished in the process.