The Evolution of Pizza 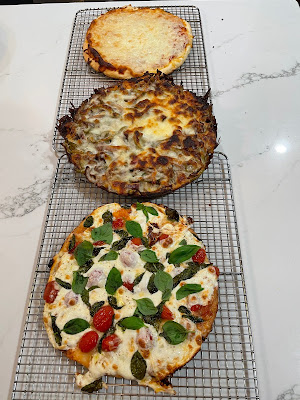 Growing up, my family would eat pizza quite regularly but since we lived on a rural farm 20 miles from the nearest pizza place, it was always homemade. My mom would make it on a rectangular cookie sheet in the oven and each of us could top our two slices as we saw fit. Later when I went to college, pizza became a necessity as our dorms didn't serve food on Sundays and the only places that delivered were pizza places. They would come into the ground floor of our dorm about every half hour with a stack of 10 or more pizzas, per company. It was a phenomenal business for sure. But when I graduated college, pizza along with ramen noodles just fell out of personal favor for a long long time. Eventually pizza came back into my life though it was mostly the occasional ordered pizza.

Then I got married and pizza really began to evolve. As I had done my entire life thus far, pizza started in our family as a rectangular cookie sheet, loaded up with various toppings. But then baking stones started entering into the lives of ordinary pizza cookers at home and we ended up with one along with a couple types of peels. We switched to making personal pizzas topped as we each desired and cooked on a baking stone in the oven. We liked the crust it produced but there were a few problems. The biggest problem was trying to get a pizza loaded full of ingredients into an oven without spilling or scrunching up the pizza. We had a conveyor like pizza peel that would work fairly well at off loading the pizza onto the stone but it was finicky to get set just right and was almost impossible to use it to retrieve the pizza. We tried a wooden peel but it required the right amount of corn meal on the paddle to offload the pizza onto the stone or you would end up trying to pull it off bare handed while burning all the hair off your arms in the intense heat. Eventually we got a thin metal peel which had the same problems off loading as the wooden one had but unlike any of the other peels, made retrieving pizzas easy. So we migrated to the two pizza peel system, a finicky conveyor pizza peel to unload the pizza and the thin metal one to retrieve it. However, two pizza peels and a baking stone was a lot to clean and store just for pizza night. Also, we yearned for the deep dish pizzas loaded full of toppings that we just couldn't do using that system.

One Saturday afternoon we happened to see a cooking show that made pizza in cast iron pans, something I had never tried before. You stick the cast iron pan in an oven and then preheat oven and pan to about 450 F degrees and once scorching hot, pull the pan out of the oven and put on your counter. Add some olive oil to coat the bottom, add your crust which starts sizzling upon impact, load up your ingredients, as many as you want, and then put the pan back in fro 10 or 15 minutes until the desired charred doneness on the cheese. It is like manna from heaven. I especially like overshooting the cheese up next to the cast iron pan sides so I get crispy charred cheese ringing the edge of my pizza. We have enough cast iron pans we can do several pizzas at a time. You can make it as thin or as deep dish as you like and it is easy to get in and out of the oven by just grabbing the pan handles with a thick oven mitt. Best of all, it is so easy to clean if one starts with well seasoned pans.

Above you see the three pizzas from our latest pizza night. Starting from the top, cheese pizza for the kids, the middle is a half vegetarian half sausage pizza (the bottom half is the sausage and top half the vegetarian part) and the bottom pizza is a tomato, mozzarella and basil pizza. For now, we have been very content with this method and I am hard pressed to think we will stray to another form, but I won't rule it out. But I do know that unless we are extremely feeling lazy or are out of cheese and other essential pizza ingredients, this method has become our preferred method for making pizza and is also much cheaper than supporting our neighbor.

Our neighbor you ask? Our neighbor lady and late husband used to own nearly a hundred pizza franchises across three states. She has now sold most of them if not all, but I know from just our idle fence line chit chat sessions over the years, the franchises were very kind to their retirement account.