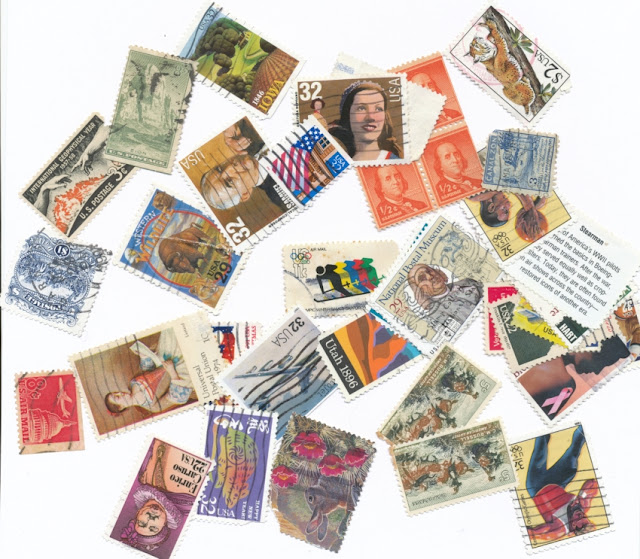 It's been a long time since I've written on here about my eccentric great uncle. To those unfamiliar, he married a crippled lady who died a few years later and then sort of went off the deep end becoming a hoarder among other things. He also collected the top five albums on Billboards Top 100 list every week for nearly 70 years and stamps. After he passed away and we buried him with his wife, we spent long days cleaning his house of the mountains of trash and trying to decipher if his handfuls of vast collections had any value. My mom ended up with the stamp collection among other things and this is how I have come to inherit it.

The stamp collection fills up three of the largest sized plastic tubs that one can buy and I'm guessing comprises about 200+ pounds of stamps. I spent a recent Sunday just looking through the first box and was completely overwhelmed. There are pounds of loose stamps like those above which were in a wax paper envelope labeled defective. There were dozens of books full of canceled and un-canceled stamps in just about any category you can image from subject to country of origin. There are probably hundreds of thousands of stamps that would probably take me years to look through.

As the story goes, when my great uncle went to the nursing home in his last couple years of life, he took his most valuable stamps with him and then gave them to the local philatelic club. As with many stories in this part of the family, they are all over the map as far as being true, partially true, not at all true, etc. My uncle, though he had a great relationship with my family, was estranged at best from his brother (my grandfather) and lived halfway across the country. So any news I heard from my grandfather about my great Uncle, I learned to take with a grain of salt.

So whether or not there are any valuable stamps in this collection, I will probably never know and really, don't really care. The stamps though fascinating to look at, are not something I will probably do anything further with. I would simply like to find a good home for them with someone who might enjoy them even more. But before that happens, I need to look through the rest of the boxes in case I find more treasures than I already have.

But before I tell  you what I found, I need to give you a little background. Although I had known that my great uncle was a stamp collector when he was alive, I was never interested in it as were my parents or grandparents. Until yesterday, I had forgot about my great uncle's requests that all correspondence he sent to us (which was a lot even for the times), had to be mailed back to him without marking up the stamp side of the envelope or postcard. I distinctly remember my grandparents griping about having to waste a first class stamp to send back a postcard that my uncle had sent them. If memory serves me right, I'm pretty sure my mom thought the same things but kept them more private. So anyway, for years my uncle would send us postcards that we had to mail back.

In box number one of the stamp collection, there were probably a thousand unsent postcards that I was shuffling through when I noticed some of them had writing on them. I started reading the backs and discovered most were correspondence that my great uncle had sent either my grandparents or the family of his late wife and they had mailed them back to him. It was fascinating stuff especially to see what he had written about me to other people. Most of these are fairly recent postcards (about 20 years ago) so I'm hoping perhaps there will be more to find in the other two boxes (130 pounds) of stamp collection.

On a related note, if anyone knows anything about finding a good home for stamp collections, please drop me an email or leave a comment.

My favorite part of this was how you had to mail correspondence back to him and how your grandparents complained about it. That would have been my parents, no doubt, only they would have refused! (Or insisted on advance payment for the stamp they would have to use to mail the postcard back!)

The retirement property we bought a few years ago has a ramshackle house on it. It will be torn down at some point, but for right now, is being used for storage of building supplies. In any case, the owner of that little house simply walked out of it and moved in with her sister. She left everything behind. I was sorting through this stuff and found a Christmas card. It was sent by my mother. It was a shock to recognize the handwriting.

I can't help you with the stamps, but if you find what to do with all those record albums, share it with me. We've got hundreds of them as well.

Bob - My grandfather was an extremely practical guy who always pinched pennies, did everything himself and had a plan for every day of his life. His brother, my great uncle, didn't know left from right, couldn't do anything on his own, and kind of flew by the seat of his pants through life doing odd jobs and acting in theater productions. They never could see eye to eye.

Debby - We hauled those records back to Iowa in the largest rental truck we could find and they filled it more than three feet deep. My uncle (mom's brother) got them and he ended up selling them to someone who I'm sure pieced them out over the internet. That person did find a few personal records that my great uncle recorded on leave from World War II that he gave back to the family and I wrote a post on awhile ago. https://riverbendjournal.blogspot.com/2014/09/pepsi-cola-records.html

I'm far more interested in the album collection than the stamps, but that's just me.

I think often people overestimate the value of their collections (whether coins, stamps, or whatever), but I'd certainly look into the value of those he has marked as "defective". That's often what give stamps their value... a run that got out into circulation before an error was discovered.

I'm still a little amazed at the though of all those tubs of stamps.

Kelly - I am blown away by the stamp collection. I looked through the other two huge tubs but they are mostly bags of loose stamps that have been cut off mail by whomever and mailed to my great uncle. Unfortunately I didn't find anything of value. Probably the value is in the completed sets that were in the first tub but upon inspecting them, most of them are fairly modern sets so I doubt they are of little value. I tend to believe the story that he gave anything of value away. After talking with a couple nearby coin/stamp shops, I think the only value is in the unused stamps. I have an idea for a project using those stamps and I will share more on that later. I think I will also write up something about my great Uncle's record collection which I haven't written about in many years or perhaps over a decade and it might be interesting to those newer blog readers.

I was a pretty serious stamp collector as a kid, and still have my collection but it fits inside a boot box--nothing like this. It was fun for several years. Interesting story. By the way, if ever in DC, next to Union Station, is the United States Postal Service museum. They have quite a collection.

Jeff - I can see how it would be an addicting hobby and fairly easy to get into.