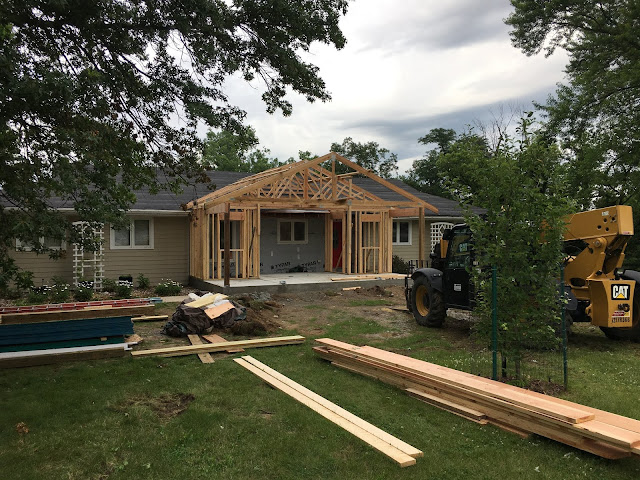 It's been killing hot so I can't blame the crew but progress has been slow. They are a three person crew but it really seems like a one man crew. The guy my age does most of the work, the second older gentleman is support and an extra pair of hands and the lady is the gopher. She picks up things, goes for lunch, etc. They are all super friendly and have done good work so I'm not complaining. I suspect the main contracting crew that was out here to do the concrete are off on another project so this smaller crew is kind of like a B team just keeping things going until the A team gets back on site.

Then there have been other issues. The trusses were about six inches too short and had to be modified to make work which means are overhang on either side will be about three inches shorter than those on the house. Not really an issue since they aren't designed to tie into each other and probably won't even be noticeable but caused a couple back and forth moments before making the decision.

We also had a huge thunderstorm dump an inch of rain in about ten minutes with the entire south side of our roof exposed. Fortunately it did have tar paper tacked on and I haven't seen any obvious sides of water damage in the rooms other than the one we are remodeling on that side. I didn't see any water damage in the kitchen either but since it is going to be gutted, I wasn't too worried. I'm hoping that today they will get the vaulted part of the roof completed and the roof decking in place. Then perhaps next week we can get everything shingled and dried in.

I should mention, the eight feet porch in front of the bumpouts to the house will have a vaulted ceiling to allow for the decorate element on the gable end to be visible. Hard to explain so I'll just show an artist rendering below for now to remind you what we are going for. We have begun to empty out our kitchen but are going to spend the next few days going on a cooking spree to freeze some meals ahead of time. It won't be long, I hope, before we no longer have a kitchen to cook in. 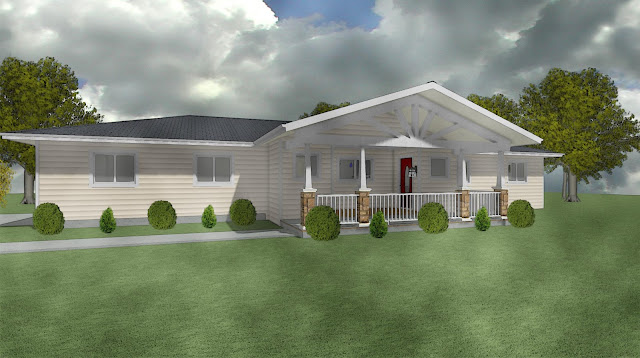 This is going to look so good, Ed!

What's the latest on your dad? I've been thinking about him.

Kelly - As of now, he is in New Hampshire. I think he will be along the border with Vermont for quite a while before cutting across into Maine. When I spoke to him two days ago, he had 487 miles left to go.

The rendering is really nice. I know it seems slow and all of us who have done a renovation or remodel have been there, but keep thinking of the finished product and how nice it’s going to be!

That is really attractive! I am catching up, so it looks like a lot of progress to me!

It's really nice to see your house taking shape. It will be very attractive when it's done.

Nice to hear your dad has made such good progress! I hope he had better temps and weather for hiking than we've had.

Susan - I hope so. The house was really blah when we bought it.

Leigh - The temps haven't been so bad yet but the rain has been horrible out there. He said he is more ready to live someplace with a roof over his head again.